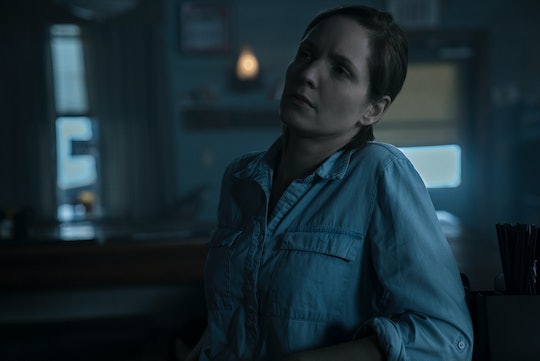 Rachel's Whereabouts In 'Ozark' Are Still A Mystery

When Ozark’s inaugural season ended, it looked like Rachel was driving off into the sunset with a ton of yet-to-be laundered money. When Season 2 opened, she was still missing and Marty had no clue where she took off to — or if she could be a potential problem. So where is Rachel in Ozark Season 2? She knows some of the details about Marty’s money laundering business but rather than using the stolen cash to blackmail him or stay in business, she really just seemed to want to disappear.

At the start of the new season it’s unclear where she might have run off to and not even Tuck seemed to know where she went. Rachel was never someone who just volunteered personal information, so nobody knows much about her personal life outside of the town. Does she have relatives elsewhere in the U.S.? Does she have secrets?

Maybe she plans to get as far away as possible, or maybe she plans to stay close to her home. The big city closest to the Ozarks is Tulsa, so it's possible that Rachel drove there first — though it’s still more than 200 miles away. Kansas City is also just a few hour’s drive away, so maybe she was headed there when she left.

In Season 1, Marty and Rachel worked together at the Blue Cat Lodge, Rachel's dilapidated hotel which Marty needed as a front for his money-laundering. Of course she didn't know anything about it at first. And unlike pretty much everyone else on the show, she isn’t a criminal — unless you count stealing a bunch of the cartel’s money before it was laundered, of course.

I assume that stealing the cash and taking off will come back to bite her (and Marty) in the butt eventually. And when that happens, Marty will need to be more actively searching for his former business partner. But for the time being, it looks like Rachel is MIA.

Jordana Spiro, the actress who plays Rachel, was at the Ozark Season 2 red carpet premiere, so at the very least, she is apparently a part of Season 2. It’s really a matter of when she’ll show up and what she’s been up to. "Rachel has run off with quite a bit of money and I think she thought she was gonna have a more in-control and powerful way of spending it than she does," Spiro told Mingle Media TV. "So [Rachel] gets herself into a bit of trouble. I think she feels a bit rudderless now that she’s lost control of the Blue Cat."

Although Spiro didn't reveal where Rachel gets into trouble or where she went when she took off at the end of Season 1, I think it’s safe to say that she probably isn't all that far from the Ozarks. Eventually, Marty is going to try and find her. And if he doesn’t, then either the cartel's attorney, Helen Pierce, or the Snells will be after her for that money. As Helen already proved, those who cross the cartel are eventually punished for their offenses. Even though Rachel is essentially an innocent in all of this, she’s not above the powers that be when it comes to Marty’s business dealings. So you have to assume that, eventually, she’ll be forced to come back to town for Marty’s help.