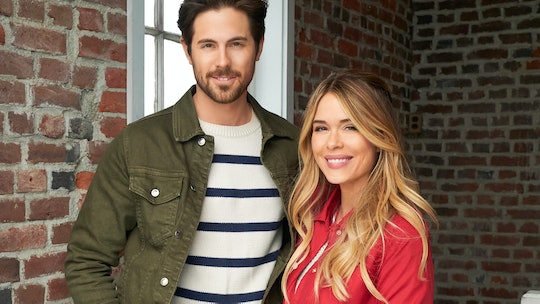 The Hallmark Channel's Countdown to Summer continues on Saturday, May 18, with Sailing into Love. Starring Satisfaction's Leah Renee and Altered Carbon's Chris McNally, this new original love story will surely blow the rest out of the water — lame pun intended. From the film's preview trailer, it's crystal clear that fans will not only be swept off their feet by the characters, but dazzled by breathtaking scenery. So where is Sailing into Love set? The latest addition to Hallmark Channel's long lineup of romance movies is set in two fictional places — the seaside town of Willow Bay and a nearby island called Blue Island.

According to the network, Sailing into Love follows a biology teacher named Claire Richards (Renee), who returns to Willow Bay for three weddings in an attempt to get back together with her ex-boyfriend, Jason (Gary Garneau). Meanwhile, she takes a group of her students to Blue Island as part of a Summer Enrichment Biology class where she discovers that the town might sell the island to a resort developer. Claire, who has a history with Blue Island, vows to save it. Along the way, she finds an unlikely ally in Tom Hastings (McNally), who is the captain of the charter boat that takes Claire and her students to and from the island. As these things go, sparks fly between Claire and Tom. But will Tom, a self-proclaimed adventurer, stick around for the long haul?

Both Willow Bay and Blue Island play an important role for the characters in Sailing into Love. In a behind-the-scenes interview with Hallmark Channel, Renee revealed why the island matters to Claire.

"Blue Island is kind of like a character in itself in the film," Renee said. "To Claire, it represents everything from her past, her life, her growing up, her memories with her family and childhood."

Nonetheless, Willow Bay and Blue Island aren't real places. However, the crew went on-location to film some of the scenes. In the same Hallmark Channel interview, McNally and Renee confirmed that Sailing into Love was filmed in Canada.

"We are here in Victoria, [British Columbia] at this beautiful lighthouse location," Renee said.

The actors also had nothing but good things to say about Victoria. "I really like this city," McNally shared. "It's a super charming little town."

Later in the interview, McNally teased what Hallmark Channel fans can expect from his character in Sailing into Love.

"Tom's got a really great sense of adventure and he just wants to hop from city to city and that's just kind of what makes him happy... until Claire comes around," McNally said. Sounds like the perfect love story to me. But, don't take my word for it. According to both McNally and Renee, their onscreen chemistry came naturally.

"It's been really easy to have that good chemistry with him because really just a genuinely nice guy," Renee added. "He's actually really shy and an introvert and those are my favorite kind of people, personally."

If you're desperately waiting for summer or just looking for an excuse to stay in on Saturday night, then don't forget to "seas the day" and tune into Sailing into Love.

Sailing into Love premieres May 18 on Hallmark Channel.