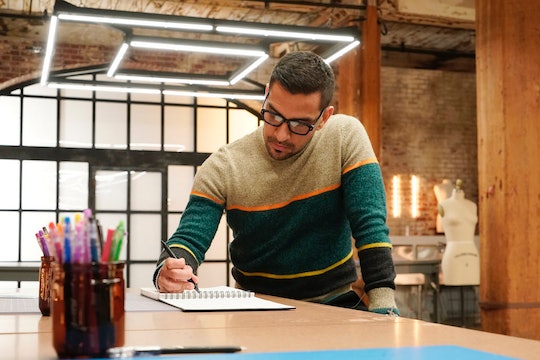 Project Runway Season 17 hasn't come to a close yet, but it's clear that Sebastian Grey is one designer to watch. He has already excelled in on competition and there's likely plenty more where that came from. But since the season has finished filming, fans might be wondering where Sebastian Grey is now and what the Project Runway contestant is doing after he claimed his 15 minutes if fame on the show. To be honest, those 15 minutes might extend a little further thanks to his drive and talent when it comes to fashion.

It's too soon in the season to say for sure who will win, but Sebastian has continued to build his brand outside of the show. According to his website, he has owned stores across Colombia that featured his brand, and judging by his Instagram, he is still just as immersed in the world of fashion as ever.

In 2018, he won a scholarship to the art and design school Instituto Marangoni and he was part of the South Florida International Fashion Week in September 2018. In January, he posted a photo of himself working on new designs with the hashtag #2020, so he likely has something big in the works. Whether he wins Project Runway this season or not, Sebastian definitely has a bright future ahead of him as a designer and he knows it.

Sebastian became interested in fashion at a young age when he began admiring ballet costumes at his recitals and from there, it snowballed into a passion that he has made into a career. Although he has sold his designs in Colombia, it wasn't until recently that he was able to showcase a collection for audiences at the South Florida International Fashion Week and his goal seems to be to move up from there in widening his reach and adding to his designs.

It looks like he might still be in school while he works on other projects to further his career, so whether Project Runway was just a stepping stone or if he actually wins this season remains to be seen. Sebastian does seem to be enjoying life as a designer in Florida while working on his latest clothing line.

A running tally of how many competition wins a contestant has on Project Runway isn't necessarily an indication of whether they will win or not, but Sebastian’s win during Episode 2 cemented his place as a contestant to keep an eye on. Honestly, though, it might not even matter if Sebastian wins, because he seems to be doing just fine after Project Runway. Contestants typically find success as designers after competing on the show and, depending on how far they make it, the show can help them make a name for themselves. For Sebastian, who already had a name in the fashion industry, competing on Project Runway has no doubt made his climb to the top a little easier.

When he isn't working on new designs or urging his followers to vote for him as their favorite designer this season, Sebastian is spending time with his significant other. Although there aren't that many pictures on his Instagram showcasing his personal life, there is one photo he shared in March that shows him smooching a boyfriend or husband with the caption #love. He hasn't said anything else on social media about the mystery guy, so he might prefer to keep some aspects of his life on the down-low. Still, Sebastian has obviously been leading a busy life outside of Project Runway and I honestly don't see him slowing down anytime soon.