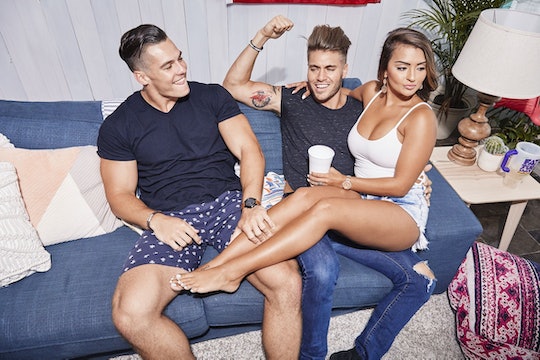 You Can Rent Out The Shore House On 'Floribama Shore'

However memorable the personalities were from the original Jersey Shore, the house itself is arguably one of the most iconic things about the show. The spinoff, Floribama Shore, might not have a duck phone to delight and confuse the roommates, but the house is once again a big part of the show, so where is the shore house on Floribama Shore? You can actually stay there yourself when they aren't filming. But since the house is now part of the series, it's understandably one of the more expensive vacation rental properties in the area.

The house is located on Panama City Beach, Florida, near the border between Florida and Alabama (hence the show's name). According to VRBO.com, the average nightly rental cost for the Floribama Shore house is $525 and it looks like the summer months fill up pretty fast. But even for a week in October, the nightly rental fee is $825. To put this cost into perspective, an average vacation rental house in the same area of the coastal town and with the same number of bedrooms as well as a private pool would be $329 per night for the same week in October.

I don't know if the Floribama Shore house was always this expensive or if the owners are simply capitalizing on the fame that the show has garnered since its premiere in 2017, but the Panama City Beach house is definitely already in high demand.

Panama City Beach is located on the panhandle of Florida and has a reputation for being a big vacation and party area. Naturally, it was the ideal place for the shore house on Floribama Shore. The beaches are known for hosting different spring break parties throughout the months of February, March, and April, but during the summer months in general, you can find 20-somethings partying it up both on and off the beaches. As we’ve seen on Floribama Shore, Panama City Beach is home to a ton of different clubs to make the nightlife as exciting as the daytime activities are and the Floribama Shore house is located in the center of it all.

The house features five bedrooms and six bathrooms with one half bath mixed in there. Viewers might find this a bit confusing, since the house definitely doesn't seem that big on the show, but I would imagine that some of the crew take up that space off camera. Filming for Season 2 of Floribama Shore reportedly started in March 2018, so MTV didn’t rent the house during the peak season, which typically begins in May. For what it's worth, the house on Floribama Shore appears to be a little nicer than the house that was used in most of the seasons of the original shore show, Jersey Shore.

Most of the cast members on the show are from the area or very close to it and Panama City Beach is a party town in general, so there was no better place to lay the foundation for another awesomely trashy and dramatic reality show about strangers who become a family by being thrust into the same vacation house for a couple of months. I still don't know if it lives up to the original Jersey Shore, but the house is still pretty amazing.