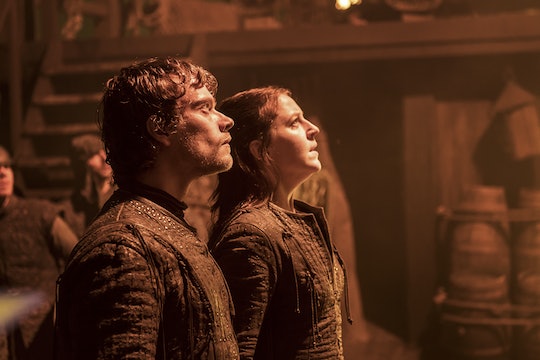 Does Theon Have A Plan On 'Game Of Thrones'?

After several seasons of extreme highs and lows with Theon, it seemed like Season 7 was going to be his time to truly redeem himself or, at the very least, go out blazing on the good guys’ side. Instead, During Season 7 Episode 2, he almost reverted back to Reek, the scared prisoner of Ramsay Bolton. And now that he literally jumped ship instead of facing Euron head on, where is Theon going on Game of Thrones?

Game of Thrones might have done the worst thing possible to a once pretty badass (if kind of awful) character in turning him back into the coward who once refused Yara’s help because he was that brainwashed by Ramsay. I can’t say he didn’t have some of that torture coming since he had turned his back on the Starks and took over Winterfell with the Iron Fleet for a while back in Season 2, but it was almost like all that hard work from before was for nothing.

Reek didn't come out in full force, but a little glimmer of him was there as Theon contemplated what to do. So now that Theon is apparently clinging to a piece of ship debris like he’s waiting for Jack and Rose to come floating by on their door, where is Theon going on Game of Thrones?

Honestly, he probably jumped off the ship because he knew he didn’t stand a chance against his uncle and instead of allowing both himself and Yara to be captured, he may have figured he’s better off to her alive. Theon was able to kill a ton of Euron’s soldiers, sure, but he hasn’t been back at it for very long and he’s likely rusty in his swordplay. He jumped off the side of the ship to escape, but come morning, he’ll probably end up back at Dragonstone.

Yara and the Sand Snakes were traveling down to Dorne, where they’d eventually turn back up to invade King’s Landing. But since they likely hadn’t been out on the water for too long, Theon is probably close enough to Dragonstone to wash up on the shore. But when he does, it might be the start of what many Theon fans have been hoping for with the Ironborn would-be leader.

On Reddit, Topher_Lee posted the theory that instead of Theon reverting back to the cowardly Reek, he could be reborn into the Drowned God. According to the Redditor’s theory, "Theon hitting rock bottom was as important to his development as losing his legs was to Bran become the Three Eyed Raven or being killed by his own men was to Jon becoming the prince that was promised."

It’s not the craziest theory and really, with less than a dozen episodes left of Game of Thrones overall, we don’t have time for some big Theon arc. So having him wash up on the shores of Dragonstone has the smartest and strongest he’s ever been would be an easy way to not only allow his story to progress, but tell Daenerys where Ellaria Sand, her last remaining daughter, and Yara are now.