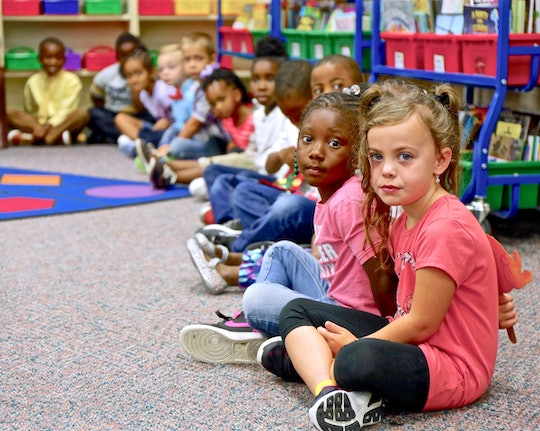 Courtesy of Save The Children

Where The U.S. Falls On This List Of Best & Worst Places For Kids To Grow Up Is Unacceptable

Where you grow up can impact the rest of your life in some pretty major ways. Which is why it's super disturbing that a new report from Save The Children found that the United States is one of the worst places to be a kid in the world, namely because of income equality. The End of Childhood Report examined how factors such as widespread poverty, conflict, and discrimination threaten childhood in over 175 countries. The report was done in conjunction with another index from the organization called The Many Faces Of Exclusion, which tracks "life-changing events" that cause kids to miss out on being a kid.

Some of those events are displacement because of conflict and extreme violence, child mortality rates for kids under 5 years old, adolescent birth rates, child marriage, child labor, school dropout rates, and malnutrition, according to the report. The best countries for a child to grow up in, considering these factors, Singapore and Slovenia tied for first place, with Norway, Sweden, and Finland in the other top spots, the report found. The worst of the bottom 10 countries are in West and Central Africa, with Niger coming in the last place, according to the report's findings. So what about America?

The United States ranks 36th on the list, according to the Save The Children report, right between Russia and Belarus. Other developed countries that the United States is often compared to, like the United Kingdom or Canada, are much safer for kids to grow up, according to a statement from Save The Children. Most Americans probably don't consider the country as terribly poor or violent, especially compared to other regions of the world, but the fact is, as the report concluded, that there are over 14 million kids living in poverty in the United States, in both rural and urban areas.

According to the report, 23.5 percent of American kids in rural areas are living in poverty, compared to 18.8 percent of kids in urban areas. Most of the states with the highest rates of child poverty are in the rural Southeast, especially in regions such as Appalachia and the Mississippi Delta. Five states — Arizona, Georgia, Louisiana, Mississippi, and South Carolina — have rural child poverty rates of over 33 percent, the report noted. In those areas, kids are more affected than urban children by infant mortality, food insecurity, low education, and teen pregnancy. Like, a lot more affected.

The report shows that 90 percent of the total food insecure counties are in rural areas and four out of five of the places where low education is rampant are rural. Teen pregnancy rates, which nationwide are at the lowest they've ever been, are 60 percent higher in rural areas than in urban ones.

Mark Shriver, Save the Children’s Senior Vice President for U.S. Programs & Advocacy, said in a statement:

Children in rural America are more likely to die in infancy, miss out on meals, become pregnant as teenagers and not attend college. Rural child poverty rates have been persistently high for at least three generations in the U.S. That’s why Save the Children is working in the rural areas most crippled by poverty, helping children overcome the challenges they face because of where they live, so they can reach their full potential.

Carolyn Milles, President & CEO of Save The Children, said in a statement that stats like these demand action. "Without urgent action, we’ll never meet the promises made three years ago by every country at the United Nations to ensure every child is in school, protected, healthy and alive by 2030 — governments can and must do more to give every child the best possible start in life."

Especially here in the United States, it makes little to no sense that kids are growing up without access to food, quality health care, or science-based sex education that could keep teen pregnancy rates down. Those should all be priorities, as they are in the other top countries for kids, like in the Netherlands and Italy. Because whether it's in rural America or somewhere halfway across the world, kids deserve to be kids.