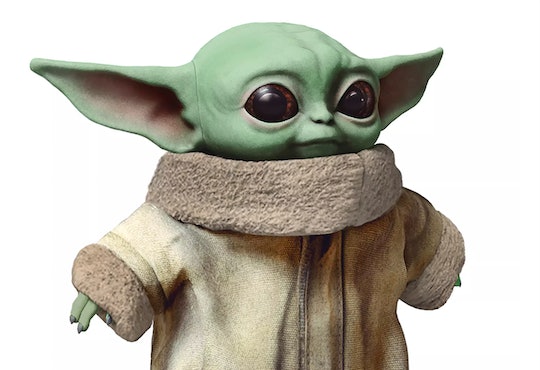 If A Baby Yoda Is At The Top Of Your Christmas List, Here's What You Need To Know

If your kid — like everyone else on the planet — is head-over-heels for the new Disney+ live-action Star Wars series The Mandalorian, they've probably already placed a Baby Yoda at the top of their Christmas list. Figuring out where to buy a Baby Yoda doll is now your number one priority, because your child's every Christmas happiness depends on it. (And also because it's the cutest toy that's ever been made.)

If your child has their heart set on a bonafide Baby Yoda doll, you may have to get creative when it comes to holiday gift-giving. The official plush Baby Yoda (actually called The Child, according to Shop Disney) by Mattel is currently only available for pre-order with an expected release date of April 1, 2020. No, this is not an April Fool's joke. Unfortunately, the lovable, bug-eyed Jedi Master in cuddly plush form will not be available in time to make it under your Christmas tree.

Pre-ordering the 11-inch plush doll, which retails for $25 at Shop Disney and on Amazon, and leaving your child an IOU note explaining that Santa's elves are still busy making their Baby Yoda doll is one option for parents this holiday season. Maybe your kid will accept this tactic, and maybe they won't, but at least you will have the adorable plush doll on order and won't have to fight people in line at Walmart to get it the day it drops on April 1. Already the number one best seller in plush figure toys currently on Amazon, there is no denying the immense popularity of Baby Yoda.

The Child Plush by Mattel
Disney

If a non-plush Baby Yoda doll option is on your radar, you will likely be just as disappointed to find out that the Funko POP version of The Child is also only available for pre-order with an expected release date in early Spring, according to Amazon. Although the $9 POP Baby Yoda character is not as much of a doll as it is a collectible figurine, it might still make an appearance on a couple (thousand) Christmas lists, but fans will have to wait a few more months to get their hands on the Baby Yoda POP character.

Because no official merchandise from The Madalorian is slated be released before the holidays, you might need to get creative if your child is insistent that a Baby Yoda doll is all they want for Christmas this year. On Etsy, fans can order a 4-inch crocheted version of Baby Yoda from the shop Unraveled Critters for $19, but several of the larger handmade versions of the character are already sold out. If you're especially talented, you might even consider crocheting your own version of The Child using a Baby Yoda crochet pattern available for $4 from Yarn2Tog on Etsy.

Another option for parents who are desperate to have at least some sort of representation of Baby Yoda under the Christmas tree is to purchase one of the unofficial plush toys available from Amazon retailers. The 4-inch plush version of Baby Yoda by Only Wholesale on Amazon for $40 and a 7-inch plush version of Baby Yoda by Underground Toys for $20 are both solid choices. Although they don't look exactly like The Child as he appears in The Mandalorian, young kids could probably be fooled into thinking that it's the real deal. It might at least appease your kids as a placeholder until you can get your hands on the official doll in April.

No matter which route you choose, hopefully by the time the official plush Baby Yoda doll comes out in April, your child will still be just as obsessed with Baby Yoda as they are right now. May the force be with you.