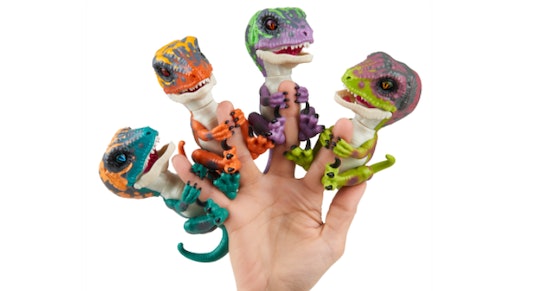 The New Dinosaur Fingerlings Finally Go On Sale Tomorrow, So Gear Up

If you've been waiting impatiently for the next generation of Fingerlings, your time has come. Unveiled in March, the newest Fingerlings, called UNTAMED Raptors, are finally hitting U.S. stores Friday, May 18, and they will satisfy the kid who loves Fingerlings and the kid who loves dinosaurs, giving you lots of "roar" for your buck. It's fun to be the first in your neighborhood to have any new toy, so now that the new Fingerlings are finally here, where can you find them?

Although kids in Canada, the United Kingdom, and Australia have been playing with their UNTAMED raptors since their release there in March, as Romper learned at the time, the new Fingerlings are available in stores and online to United States customers tomorrow. Head over to your local Walmart or Target (or shop online) to grab them, or order them from Amazon. If you're really ambitious and want to make sure you don't miss out on the first shipment, shoot to get to the store as it opens and surprise your kids when they get home from school. To celebrate their "Ferocious Friday" release on May 18, there are videos you can watch to see the dinosaurs playing around.

There are four raptors to choose from — Stealth, Blaze, Fury, and Razor. For the palatable price of $14.99, you can buy them all at once and give the kids an UNTAMED party or dole them out one by one and let them savor the anticipation.

If you can't wait a few more hours, you could try pre-ordering a Fingerling raptor on Amazon. However, the site lists it as "in stock on May 23rd" and at a cost of $24.99, so it's not the best option if you're looking for immediate gratification. You may want to wait to see if the price comes back to the $14.99 after the release.

Be prepared for some noise in your house as the kids play with their new UNTAMED Fingerlings. Montreal-based toymaker, WowWee has created four different dinos, all with their own individual personalities. WowWee's public relations firm said that the Fingerlings, "react to touch, motion, and sound with over 40 different sounds and animations." They even fart like the classic monkey Fingerlings. It's a totally interactive experience as the things your kids do to them will affect what the raptor does. The raptors even know the difference between being petted and being poked and react differently to each, according to the introduction video.

Kids can create any storyline they want with their Fingerlings and make each of them the good dino or the bad dino, friend or foe, depending on their mood. The more your child interacts with the Fingerling, the better they will understand what each action will do. Each touch, tap, and tickle brings a different reaction from the raptors. If they rub them from nose to the top of their heads, they shift from ferocious to friendly. They even nap if you lay them down gently. Careful, though, as they can go back to ferocious when you least expect it.

As the Toy Insider said, WowWee has segued from Fingerling monkeys in all different colors and level of sparkle, into the dino-realm. If the monkeys gave the kids "friendship at their fingertips", Toy Insider said that the raptors give them, "ferocious at their fingertips." These toys are really portable and great to keep the kiddies busy in the car, as long as you can handle the noise in a small space.

If you head over to Target or Walmart on Ferocious Friday and grab a few UNTAMED raptors, the kids can have a weekend full of fun. While the toys can't substitute entirely for a babysitter, you may get to sneak into the other room and have some interrupted time to read, think, pay the bills, watch some Netflix, whatever it is you would fill your weekends with if you had total freedom.

More Like This
Barbie Honors Aviator “Queen” Bessie Coleman In Their Inspiring Women Line
30 Messages To Write In A Valentine's Day Card For Your Child
13 Is "Too Early" For Kids To Be On Social Media, Surgeon General Cautions
The Best Travel Tips For Solo Parenting
What Parents Are Talking About — Delivered Straight To Your Inbox