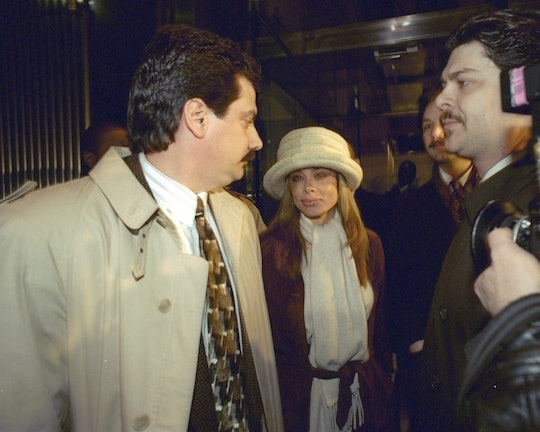 Since airing on FX, The People v. O.J. Simpson: American Crime Story has unveiled some interesting facts about the people involved in the 1994 O.J. Simpson case, as well as those connected to it. The Kardashian family's involvement is slightly better known to the public — Robert Kardashian was one of Simpson's key defenders, and Kris Jenner was good friends with Simpson's estranged wife Nicole Brown — but many have forgotten about a different reality star's connection to the case. Faye Resnick, a socialite and Brown's best friend, wrote Nicole Brown Simpson: The Private Diary of a Life Interrupted shortly after Brown's death. The book definitely ruffled feathers, and continues to do so today. If you want to make up your own mind about the tome, though, you may be wondering where to buy Faye Resnick's book about Nicole Brown (seeing as it was published over two decades ago).

Unfortunately for the curious, it seems the book is no longer in production. On the bright side, however, Amazon does sell Faye Resnick's book through its various second-hand booksellers. Barnes & Nobles offers the same opportunity, and you can buy copies of the book from B&N's marketplace of distributors. If you were looking for the Kindle edition, you're out of luck: Resnick's book doesn't seem to be available in PDF or other e-reader-friendly formats, and it definitely ages itself by being offered via audio cassette on Amazon. (Enjoy the relic, and best of luck playing it.)

Resnick's book definitely received varied feedback, and a lot of it was not entirely receptive. Shortly after Brown's death, Resnick joined forces with gossip columnist Mike Walker and managed to publish Nicole Brown Simpson: The Private Diary of a Life Interrupted just months after Brown's death. Writing the book definitely propelled Resnick into the limelight — since its publication, Resnick has starred on The Real Housewives of Beverly Hills, appeared on Keeping Up With the Kardashians, and posed naked for Playboy.

But the book's publication was not without its consequences. Nicole Brown's father, Lou, told The Los Angeles Times that the book was, "T-R-A-S-H." Lou then went on to say that Resnick "wasn't that close" to Nicole at all, adding

She was a girl in need. Nicole was a giving person. This girl had a drug problem. She (Nicole) took her in for a couple of weeks, then she (Resnick) was gone. I don't know where she got all of her misinformation, but it's not anything we can confirm. And Nicole is not here to defend herself.

The memoir didn't only dredge up strong feelings about the case and the book — its publication actually halted court proceedings for a brief stint in October 1994, according to The L.A. Times, and Resnick was called upon to testify by the defense. In 2016, however, Resnick seems to have made her peace with the trial and hopes ACS will go further than sensationalizing the O.J. Simpson case. As she said in a statement,

My only wish is that the series will bring to the forefront the horrors of domestic abuse that roughly 3.5 million women continue to experience every year. Instead of opening painful wounds for many people, or becoming a pointless media circus, I'm hoping this series serves as another chance to remind the American public that domestic abuse remains a lethal issue, even 22 years after this nightmare.

Regardless of Resnick's intentions behind publishing the biography and how it was received by those close to Brown, Resnick's current view on American Crime Story seem to be coming from the right place. And if you aren't sure whether that's the case, read her book and see for yourself.