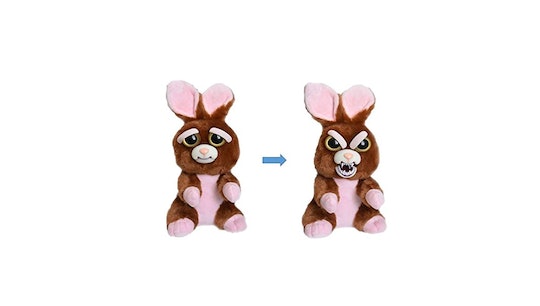 Move over Fingerlings: there's a new interactive animal in town. Seriously: these creatures have more attitude than you could imagine, which may be the secret to their intense and sudden popularity. In fact, knowing where to buy Feisty Pets — because they're sold out already in many places — might put you in the parental cool club for a bit. By all accounts these stuffed animals are the hot toy of the moment.

First of all, if you're scrambling to get your paws on a Feisty Pet, a few vendors currently have them in stock. The William Mark Corporation, makers of Feisty Pets, recommends customers check out select Hallmark Stores, M & M Toy Stores, and Vat 19 for Feisty Pet availability. In addition, Amazon sellers Great Price Fast Service and Firefly Buys are both recommended by the William Mark Corporation. At the time of this writing, it looks like Vat 19 and the Amazon sellers appear to have the most stock on hand. It also looks like vendors such as Think Geek, Walmart, and Hot Topic still have some in stock. Even if your local toy shops are all sold out, as several of them appear to be, the internet can help you adopt the Feisty Pet of your dreams.

At their heart, Feisty Pets are an unexpected take on the traditional stuffed toy animal. What looks like a sweet-faced puppy or unicorn turns into a vicious beast when hugged or squeezed. The simple but hilarious concept has helped make Feisty Pets popular, and these two-faced plushies have struck a chord with many people, parents and kids alike, perhaps in different ways. There's just something compelling about a cute teddy bear that suddenly narrows its eyes and growls at you.

If these animals with an attitude have been around for a little while, why is there such a sudden increase in demand? As with most things, you can blame the internet. A viral Facebook video sent demand for Feisty Pets through the roof, according to Toy News. The 12-second video, which shows a child getting completely startled by the unicorn Glenda Glitterpoop's scary face, is perfectly poised for internet fame. It's quick, silly, and funny, which has earned over a million shares on Facebook, as well as countless views on subsequent sites. For its part, the video has created quite the impact for the product. In fact, many of the commenters are parents who want to pull a similar stunt on their own children. (Oh, and for the record: the startled star of the video is OK and now finds the incident amusing, according to the original Facebook post on Feisty Pets.)

If your family wants to adopt a Feisty Pet, there are several options. It looks like 24 different animals are currently available, including several cats and dogs, a monkey, and even a sloth. Some of the original models now have different facial expressions (including an "evil grin"), and a few are available in a Feisty 4" mini size, according to WMC Toys. It's also worth noting that the toys are completely mechanical, so they won't eat up your batteries.

Oh, and if this high demand for cute stuffed animals is giving you flashbacks of the Beanie Babies era, you are far from alone. Maybe the popularity of Feisty Pets will give you the chance to tell some "back in my day" stories about the long lines for Nip the Cat and Peanut the Elephant. But those creatures didn't even change facial expressions, so your kid might not understand all the fuss.

More Like This
19 Gifts College Grads Will Love & Actually Use
20 Best Gifts For Stepmoms
From Captions To Gifts, These Are All The Kindergarten Graduation Ideas You Need
The Ultimate Baby Registry Checklist