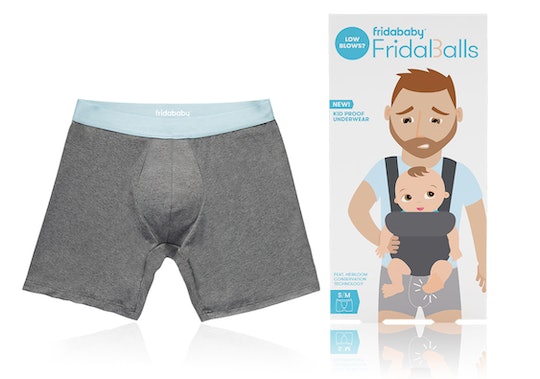 If necessity is the mother of invention, then testicle pain may be the father of invention — at least in this case. When guys play sports, they often invest in a hard athletic cup to protect their "jewels". Turns out, having a kid can be just as threatening, but a guy's not going to walk around all day or sleep all night with a hard plastic shell covering his balls. Not to worry: FridaBaby's coming to the rescue. If you or your mate is in need of FridaBaby's latest genius invention, here's where you can buy FridaBaby's FridaBalls underwear and make sure his "men" have some armor.

Unfortunately, help will not be immediate as FridaBalls: The Kid-Proof Underwear is only available for pre-order right now and plans to ship mid-summer. If you go to the Fridababy website, you can join their waitlist and be notified as soon as possible when this $28 pair of underwear will be obtainable.

Let's dive into FridaBaby's impressive track record. The brand is famous for their other ingenious products, like the Snotsucker which literally lets you suck the mucous out of stuffy noses and the Windi, which helps babies release trapped gas that might be causing them pain. Their marketing genius seems to be to identify urgent needs of parents and develop products to meet those needs. Who else would create special products called Buggerwiper (to clean off snotty noses), Toothhugger (to thoroughly brush kiddie teeth), and most importantly, the MomWasher (to help postpartum moms get clean "down there.")

Which brings us to FridaBaby's latest must-have product. Before you have a child, no one tells you how dangerous it can be. Even an innocent cuddle could result in a swift kick to the privates, especially with a super active and unpredictable little one. With baby-wearing becoming a dad thing, too, those tootsies are dangling at just the right spot to cause some serious damage. On the playground, swing a baby high enough and they could hit dad in just the wrong place as they swing back. Then, of course, as your little one gets older you wander into a whole other world of sports injuries. As proud as your partner might be of their child's t-ball line drive, they won't be glowing with pride if that line drive goes straight to their nuts. (The hilarious video posted by YouTube user Fish Fisher below confirms that.) Unless, of course, they have FridaBalls. FridaBalls put their "patent pending Heirloom Conservation Technology (HCT)" into a reinforced pouch at the front of soft, breathable boxer briefs so that dad's self-proclaimed most precious assets are protected.

And these are just the unintentional possibilities. As kids get older and are well-aware of the pain they can cause, dads need to be wary of sneak attacks. Whether by elbow jab or foot kick, men can be very vulnerable and a kid throwing a tantrum will have no problem whacking their dads in their sensitive zone. FridaBalls is designed to soften that blow.

This could even be a great gift for the pediatrician or nurse in your life. Some babies or kids are known to give reflective kicks when a medical practitioner is trying to peek into their ears or give them a shot. It would be wise of them to go to work fully prepared.

Currently, the other FridaBaby products are available at a wide variety of retailers including their own site, Amazon, drug store chains like Walgreens, and even smaller boutique baby stores. If you go to the FridaBaby website you can see your online and in-store options for each product. As of now you can only pre-order the FridaBalls on their site, but come summer, we wouldn't be surprised if getting your own pair (or several) is just a short drive away.