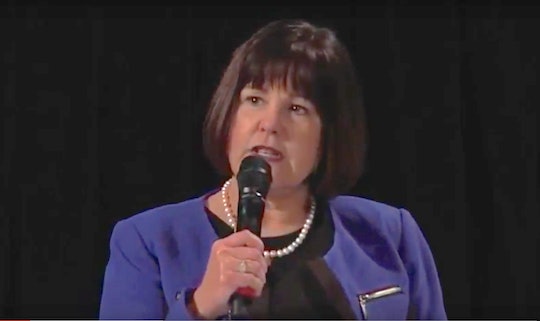 Where To Buy Karen Pence's Towel Charms (Prepare To Be Charmed)

In many ways, Karen Pence is basically the embodiment of the American Dream. Not only is she the first lady of Indiana (her husband is Gov. Mike Pence), but she has also raised three children, enjoyed a 25-year teaching career, and could even make it to the White House if Donald Trump gets his way. And as if all that weren't enough, Karen Pence is something of an entrepreneur. Her crafty little business is rather inspired, and you're going to want to know where to buy Karen Pence's towel charms before they become collector's items and sell out faster than her tired hands can make them.

Karen Pence has been in the news cycle of late, ever since it was announced that presumptive Republican presidential nominee Donald Trump would be choosing her husband as his vice presidential candidate. Karen has long been by her husband's side at various political events, campaigning with him and supporting him over the last 15 years of his political career. So it makes me happy to know that Pence has supported his wife's career as well; When Karen sought an amendment to the personal use policy for the Governor's Residence in order to allow her to start her business in 2015, her husband fully supported the move. And thank god, because we now have, That's My Towel Charms.

If you're wondering what a "towel charm" is, it's pretty ingenious. As Karen Pence explains on her website:

And how many times have you walked into the bathroom and seen multiple towels on the floor and wondered, "Whose towel is whose?" Towel charms solve that problem and eliminate daily unnecessary laundry.

With these clever and adorable little towel charms (which she designed with a charm holder that goes through the towel), a person never has to ask "Is that my towel" again. They can just affix a towel charm to their towel and everyone will know. It's better for the environment (less laundry) and better for parents (less laundry). And now I feel like I'm making an infomercial.

These towel charms are available for direct purchase from the website (and email providers get an extra 10 percent off), and cost just over $6 a piece. The site also offers special add-ones like adding your initial or giftwrapping at reasonable prices, and there are special collections like Christmas, animals, beach, coffee pots, and even cowboys. I was a skeptic at first, but I think she might be turning me here.

So here is what I hope happens: I hope that, if the Trumps/Pences make it to the White House, Karen Pence and Melania Trump start a craft room. I could see Melania being a bit tentative at first but once they share a glass of wine and a laugh, I predict she would totally get into it.

And the two of them could bond. Because otherwise, it's gonna be a long four years.