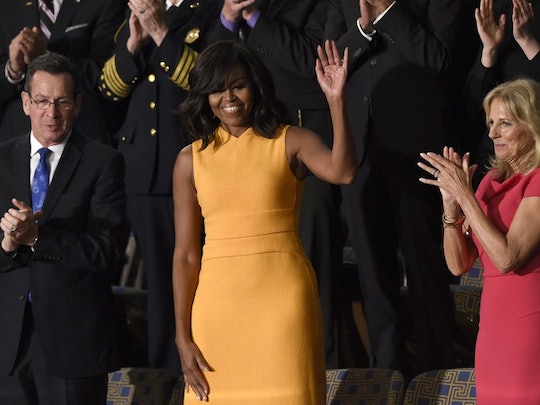 President Obama's rousing speech got its fair share of applause, but I have to believe the First Lady's outfit was driving a lot of the cheers at the State of the Union address. So where can you buy Michelle Obama's yellow dress from Tuesday night? That is the big question of the evening from anyone who's more concerned with fashion than politics.

Last year, Michelle Obama wore a more conservative outfit for the big event, donning a conservative gray tweed skirt suit by Michael Kors. The previous year's was an Alaia dress that was fashion forward but more muted in color, a glossy forest green. In 2013, it was a cranberry Jason Wu sheath. There appears to be no distinct rhyme or reason to Michelle's wardrobe choices. They run the gamut from price point to shape to provenance. The one unifying thread here is that they all look so. damn good.

This year, in 2016, perhaps in celebration of the fact that her time under the harsh glare of the spotlight is almost over, Mrs. Obama picked a downright sunny and playful Narciso Rodriguez midi dress in a glowing marigold. Doesn't she just look like she's celebrating something? Maybe the fact that she doesn't have to be in the same room as people like Ted Cruz many more times in her life?

And guess what? IT'S EVEN ON SALE. You too can look this glowing and happy, for under a grand. (Update: It seems as though the dress became out of stock before the end of the speech.)

Mrs. Obama has been seen in everything from high end designers like those mentioned above, to mall brands like J. Crew and fast fashion like H&M. Will our next First Lady so easily master the aspirational high/low mix? Something tells me it might be the First Gentleman's turn to act as fashion plate after the impending election.