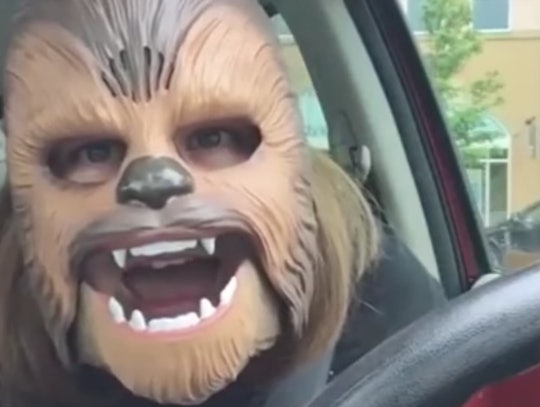 Here's Where To Buy The Chewbacca Mom Mask For Halloween

Sometimes the simplest things in life can bring you tons of joy, which is why Candace Payne broke the internet last year when she posted a video of herself wearing a Chewbacca mask, while laughing hysterically. Payne’s video brought smiles on millions of faces, and made her the infamous “Chewbacca Mom”. So if you want to join in on the laughter this year, you'll want to know where to buy the Chewbacca mom mask for Halloween.

So how did her simple video end up breaking the record as the most watched Facebook Live video ever? It was her sheer joy and laughter that made the video so much fun to watch, and all you wanted to do was laugh with her. (With your very own Chewbacca mask, obviously.)

The mask Payne wore is the Chewbacca Electronic Mask made by Hasbro. After putting on the mask, when you open your mouth wide, the mouth of the mask moves too, but it also makes the hilarious Wookie noises that Chewbacca makes in the Star Wars movies. It’s actually a pretty cool toy, especially if you’re a Star Wars fan and if you want to pee your pants from laughing so hard. (Seriously, why is this so funny? It's literally the perfect gift for everyone.)

The coolest thing about the mask though is that it will provide tons of fun, even after Halloween. It's also fairly easy to get — if you have Amazon Prime, you can get the Star Wars The Force Awakens Chewbacca electronic mask ($29) from Amazon with free two-day shipping. You may even find it on sale for a lower price on Amazon’s sale days.

You can go straight to the manufacturer, Hasbro, and pick up the Star Wars The Force Awakens Chewbacca Electronic Mask ($30) from their website, too. This should ensure you’ll be getting the real deal, straight from the Wookie’s mouth. (Will it get you your own front seat ride with James Corden and J.J. Abrams? Maybe not. I think the moment's gone now.)

Because it’s an older item, it may no longer be in physical stock at carriers like Toys 'R’ Us, or Kohl’s, which is where Payne purchased hers from. You may, however, be able to find a Chewbacca electronic mask ($35) at your local Gamestop or purchase online for store pickup. You might even find the Chewbacca mask ($30) on sale at your nearest Barnes and Noble.

So if you're ready to join the world of Chewbacca motherhood this year, you can be on your way to trick-or-treating Wookie style with just a few clicks of a button. The best part, other than using the mask year-round, is that your whole family can get into the spirit. As long as someone is dressed as Chewy's favorite sidekick, Han Solo, you should be able to use The Force incredibly well all Halloween night. Whether that means your kids will listen to you when you ask them to stop at only one piece of candy remains to be seen. But with the Chewbacca mask, at least you can spend the entire year asking them to do chores in a Wookie voice.