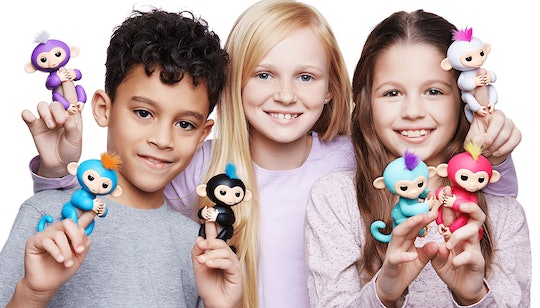 The Fingerlings are here, and I'm not talking about some kind of new artisanal potato of which you're not familiar. Fingerlings are basically the toy fad of the moment, in the same vein that Hatchimals, Tamagotchi, and Furbies have been over the years — and I guarantee you, your kid already wants one. Fingerlings themselves are surprisingly cute baby robot monkeys that respond to human touch and movement. And of course, they come with accessories — because what popular toy doesn't have a full set of accessories? Here's where to buy the Fingerling playsets — but I'll warn you, they're going to be just as hard to get as the Fingerlings figures.

Fingerlings are the brainchild of WowWee Toys, a toy manufacturer with a pretty robust line up of robotic toys so far — but Fingerlings have upped WowWee's robotic cuteness factor by like, 1,000. The company has branched out its Fingerlings line of toys to its own website — myfingerlings.com — so you won't be able to buy them direct from the WowWee company website, unlike several of its other toys. Thankfully, at least two major retailers will carry Fingerlings playsets in both stores and online — at least in theory. Like I said, these Fingerlings things are selling like hotcakes.