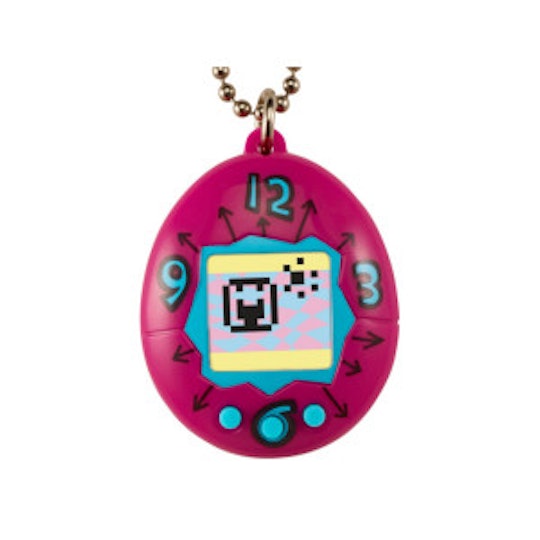 If you were a kid in the '90s, you were probably obsessed with Tamagotchi digital pets. They went away for a while, but because nothing every really goes out of style for good, you may be excited to know that these pocket-sized pets are making a miniature comeback. If you want your kids to love these little gadgets as much as you did, you're going to want to jump on the chance to buy one. And since the release is only for a limited time, you need to know where to buy the new Tamagotchi stat.

In honor of the twentieth anniversary of the Tamagotchi's arrival in the United States from Japan, Bandai America has announced that a smaller version of the digital pet will be hitting the market for a limited time beginning, November 5, 2017, and will be available at online retail giants such as Amazon and Ebay, as well as Walmart and Toys "R" Us (who have already made them available for pre-order). The special anniversary edition will come in six different colorful designs, and will be sold for $14.99.

The original egg-shaped keychains made their American debut in the mid nineties. At the center of the toy was a digital, Pac Man-like pet that depended on it's owner for food and nurturing. Apartment-dwelling and allergy-ridden kids who weren't able to have a pet of their own a chance to get a feel for what it's like to care for a furry friend. The revamped model will essentially be the same as it's predecessor. The battery-powered keychain will house a digital pet that will demand that it's owner feed, care for, and clean up after it. The key differences will be that the new anniversary version will be slightly smaller than the original with only three buttons underneath and a 16 x 16 pixel screen, according to Thrillist.

If you're still beating yourself up about neglecting your original Tamagotchi, check out this list of options for preordering your Tamagotchi Friend, and give yourself a chance at a digital pet parenting do over. They are guaranteed to be a hot item this holiday season, so don't wait too long. And if you actually manage to get your hands on one (or two), the only question will be whether or not this generation of tech-obsessed kids will want to tear themselves away from the iPad long enough to give a digital keychain the time of day.