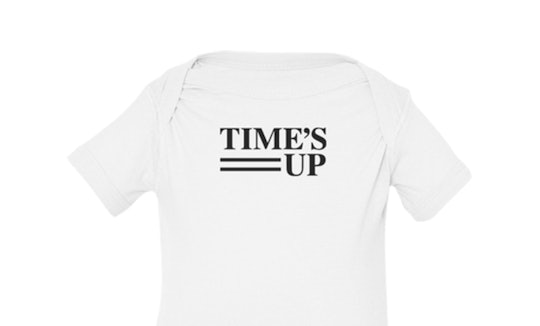 The 2018 Golden Globes were dominated by the Time's Up movement and its accompanying, symbolic fashion statements. Attendees wore black, along with the iconic Time's Up pins, to speak out about sexual harassment and inequality in the workplace. Now, you and your children can take part in the movement, because you can get a Time's Up onesie for your little one to wear, as well as all a bunch of other awesome merch.

The Time's Up movement is a Hollywood iniative to end systematic sexual harassment in the workplace — both the film industry and beyond. Supporters of this movement wore black to this year's Golden Globes, which many coupled with Time's Up lapel pins. The overwhelming popularity of the night had many asking if the Time's Up pins are available for purchase. Since the night of the Golden Globes, the Time's Up store has opened for business and it has a number of great options to support the movement.

Not only can you get your hands on a Time's Up pin, you and your brood can show your support for the movement with a variety of merchandise. In addition to the pins and onesies, items available for purchase from the store include fitted and plain T-shirts, notebooks, canvas tote bags, and logo stickers — all featuring the now infamous Time's Up logo.

The Time's Up onesie in particular may have appeal for parents interested in making the world a better place for the next generation. These little beauties are currently only available for pre-order for $20 and the high demand will cause them to take between four and six weeks to be delivered. They come in sizes for newborn, 6 months, 12 months, and 18 months.

All of these great products were inspired by the original Time's Up pin that so many celebs wore to the Golden Globes. The pin was designed by Arianne Phillips, a costume designer and stylist who Reese Witherspoon personally asked to create something to accompany the planned black ensembles. Phillips told The Hollywood Reporter that its creation wasn't easy:

Reese asked me to come to the actors’ group, and told me they were going to be wearing black and would I consider creating a pin for the nominees and male presenters. We were up against the holidays, but I said I could do it, and the first person I called was my partner-in-crime, Michael Schmidt.

Schmidt is a jewelry designer who has worked with big names like Rihanna and Lady Gaga. The two went on to design the logo and pin in less than two weeks, and had 500 of them ready for distribution at the Golden Globes. These pins went on to inspire a store full of other products. All proceeds from Time's Up merchandise benefits a very important cause: the Time's Up Legal Defense Fund.

The legal defense fund is intended to help less privileged victims of sexual assault and harassment gain access to quality legal representation. It will take on "the systemic power imbalances that have kept underrepresented groups from reaching their full potential," according to the initiative. That includes a push for equal opportunity employment. Time's Up member Shonda Rhimes told Deadline that the legal defense fund will tackle a complex and serious issue:

Earning a living should not come at the cost of anyone’s safety, dignity or morale. Every person should get to work in an environment free from abuse, assault and discrimination ... Time’s Up is working to make sure the people walking the corridors of power within the workplace and in politics truly reflect the full mix of America — the real America that looks like and includes all of us. Look, this isn’t going to be easy but it is right...

If wearing your activism loud and proud isn't for you, you can still donate to this important cause via its Go Fund Me page. No matter how you choose to show your support, the Time's Up initiative is taking on an important issue and can use your help. But you have to admit, those onesies are pretty darn cute.