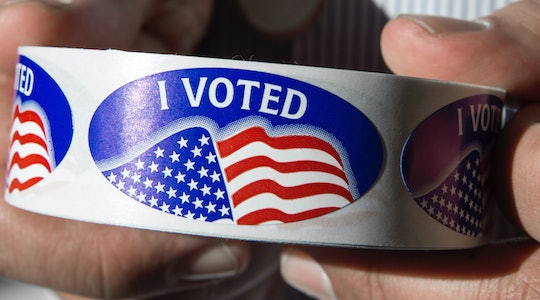 Where To Get An "I Voted" Sticker, If You Didn't Get One At The Polls

There's something about "I Voted" stickers that really sticks with people (pun intended). You can find them posted nearly everywhere on Election Day. And with early voting underway, people have already taken to social media to excitedly share pictures of their "I Voted" stickers online. Whether it's to express pride, encourage others, or even possibly shame others for opting out of voting (maybe a combination of all three?), "I Voted" stickers have proved to be popular items on all election days. So, whatever the reason, you may be excited about snagging one of these stickers after casting your vote. But what if they run out? What if someone before you snags all of them in a fit of rage and storms out before you can grab one? Don't worry: Here's where to get an "I Voted" sticker, in case you didn't get one at the polls. All hope is not lost.

There are a lot of "I Voted" sticker options online — some can be purchased and ordered through various sites, like Amazon, and with a quick Google search, you'll also find a number of companies that provide printable "I Voted" sticker templates, in which you can print "I Voted" stickers right from the comfort of your own home. So, if you had plans to take a selfie (outside of the voting booth... see: Justin Timberlake's gaffe here) with a nifty "I Voted" sticker, only to find that your polling place doesn't have one, you can still fulfill your Election Day goals.

But while "I Voted" stickers, and all stickers really (who says adults ever stop enjoying stickers?), may be light-hearted fun for many, a 2012 article from The Atlantic made an interesting point about their potential societal impact. Derek Thompson of The Atlantic provided an insightful take on the popular use of "I Voted" stickers:

The "I Voted" sticker is a signal and an advertisement. It binds people together in solidarity and reminds others to join the group. Tens of millions of people will vote in every presidential election whether there are free stickers or free cookies. But beyond these intrinsically interested (and, possibly, more informed) voters are countless more citizens who need motivation to show up at the ballot box.

For the 2016 presidential election, a number of celebrities have certainly used "I Voted" stickers to remind and encourage others to get out to the polls. Celebs like Timberlake, Jessica Biel, Zoë Kravitz, Kirstie Alley, Angela Bassett, and Kerry Washington have been outspoken about who they're supporting for the 2016 presidential election – and "I Voted" stickers have already started to make appearances on their social media accounts, prompting others, perhaps, to look into their local polling place, necessary Election Day documents, and much more.

Choosing who to vote for is always a personal decision. But it's good to know you also have plenty of choices for "I Voted" stickers as well — however you end up using them (for yourself or the rest of society's sake).