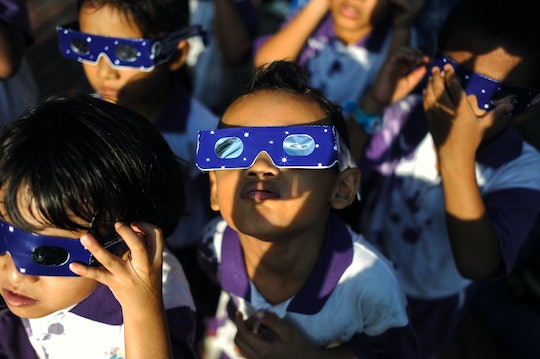 Where To Get Last-Minute Solar Eclipse Glasses

If you're anything like me, you've known about today's historic solar eclipse for a while, but consistently put off preparing for it until "later" — except "later" never actually happened, and now it's the day of the solar eclipse and you have nothing prepared. Whoops. Wondering where to get last-minute solar eclipse glasses now that the day of the eclipse is upon us?

There are a few courses of action you could take here. First, you'll want to call up your local libraries and see if they are handing out free solar eclipse glasses (and, of course, if there are any left for you to pick up). STAR_Net has a map of all participating libraries giving out eclipse glasses, although they note that most libraries have given out their allotment of glasses already.

If your local library is out of stock, you can also try one of the retailers listed below. According to the American Astronomical Society, some stores from the following retailers are selling eclipse glasses, so call their local store near you and see if they have any glasses still left in stock:

If you have the time to join a local eclipse-watching event, you may also be in luck. Many will offer free eclipse glasses at viewing parties, so make sure you find out what's going on in your city (even NASA is hosting a few official eclipse events!). If you decide to join a viewing event, though, make sure to show up early, as glasses are likely to run out quickly.

Not having any luck finding glasses locally? It might be time to get crafty. You can always make your own pinhole camera, which are super easy to make and double as a handy eclipse viewer. It lets you view the eclipse indirectly, and all you'll need to make it is a simple box (any kind will do!), an empty can, some white paper, and duct tape. NASA has a great explainer on how to make an eclipse-viewing pinhole camera on YouTube, or you can check out a simple chart with instructions on how to make a pinhole viewer.

Eclipse glasses may run out online, but if you phone around you just might find some. If not, you've got the perfect excuse for some craft time with the kids before you settle in to watch an historic astronomic event. Happy eclipse viewing!