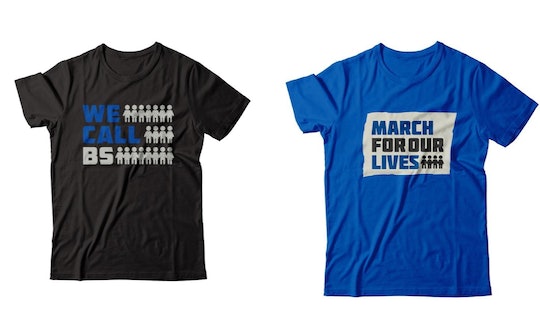 Looking For A March For Our Lives Shirt? Here's How To Get One

Just more than a month after the tragic shooting at Marjory Stoneman Douglas High School in Parkland Florida on Feb. 14, which left 17 people dead, one of the largest planned protests of the year will take place this weekend. The March For Our Lives will happen this Saturday, March 24 with demonstrations taking place across the country. Aside from making powerful and catchy posters, you may be wondering how to get your hands on a March For Our Lives shirt, so you can show your support for the march and its mission long after Saturday passes.

March For Our Lives is serving a powerful and important purpose, and will continue to do so after this weekend. The official mission and focus of March For Our Lives "is to demand that a comprehensive and effective bill be immediately brought before Congress to address these gun issues," according to the organizers' mission statement. Simply put, the March For Our Lives movement is seeking to put an absolute end to gun violence across the United States. "Not one more. We cannot allow one more child to be shot at school. We cannot allow one more teacher to make a choice to jump in front of a firing assault rifle to save the lives of students," the mission statement continued.

While the central march is taking place in Washington, D.C. this weekend, there are dozens of sister marches happening across the United States as well. And if you can't make it to a rally, there are many ways to show your support for March For Our Lives. One way to do that is by buying one of the many March For Our Lives shirts (as well as other merchandise) that are available for purchase online. Like these two below, which both run for $24.99 each.

At the moment, it's unclear whether the shirts and other merchandise items will be available in person at the actual marches. However, as the March For Our Lives organizers shared on Twitter earlier this week, if you're in Washington, D.C. and don't have a shirt yet, you can purchase one from an "Official Pop-Up Shop" hosted by The Outrage, located at 2439 18th St. NW. "100% of profits benefit the march. Open every day this week from 10am-8pm!" according to the tweet.

Of course, if you're not D.C., you can certainly buy one online. But, keep in mind, it most likely won't be delivered until after the march this weekend due to high demand.

On the same website, there are also hoodies and sweatshirts available (for around $30) as well as tote bags and bandanas, both running for $19.99. There are also baby onesies and tops for toddlers available as well, so your kid can also show their support for the anti-gun violence movement. These options for the little ones will also cost you $19.99 each. There are also mugs ($14.99) and trucker hats ($19.99) for purchase as well. So if you already have enough t-shirts in your closet, you can still stock up on other merchandise items bearing the March For Our Lives logo.

Even if you aren't able to wear your March For Our Lives shirt at the march itself, the money spent on your purchase will still go to a worthy cause. As the merchandise page noted, "All proceeds will go to support the march and organizing youth across the country."

Of course, if your closet is already full and you'd simply like to send some funds to the organizers, the march also has an official GoFundMe page where donations have been steadily pouring in since its inception. As of publication, it has raised more than $3.3 million of its $3.8 million goal.

The March For Our Lives is sure to be a historic demonstration and whether you're in Washington, D.C., a sister march near you, or at home virtually marching with these students, having a shirt is a great way to commemorate and help support all of their hard work.