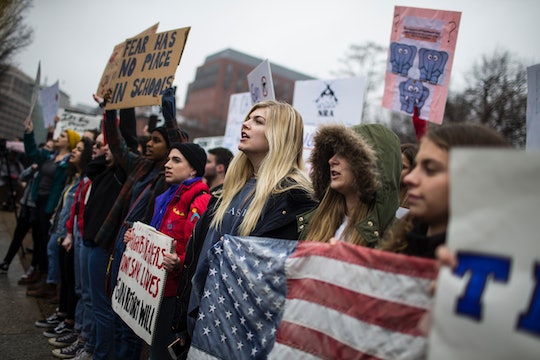 Teenagers are out to change the world, whether it's one tweet, one protest, or one empowering speech at a time. Mere days after the tragic school shooting in Parkland, Florida that left 17 students and staff members dead, students at Marjory Stoneman Douglas High School organized a nationwide event to protest gun violence, called the March For Our Lives. Demonstrations will be taking place all over the country next month, but here's what you need to know about registering for the March For Our Lives.

Although it's not mandatory, marking whether you plan on attending will help make the organizers' jobs a lot easier. And if you can't march at the central demonstration happening in Washington, D.C. on March 24, but still want to get involved, registering for one near you can connect you with one of the many sister marches taking place across the United States.

If you're interested in joining the students and anyone else wanting to make a change toward gun violence prevention, you should definitely register online (and you can do that right here!). The more people who register, the more accurate estimate event organizers will have for planning and security purposes. And registering for one of the many marches aiming to get that mission across goes a long way in helping the first-ever March For Our Lives do what it's setting out to do. I mean, if over 1 million people register, the National Rifle Association might just start quaking in its camouflage boots, ya know?

Knowing just how many are attending could help the students organizing the event with more than planning purposes. It can also go a long way as they continue to call out politicians who receive money from the NRA, and that isn't an easy task — at all. Support for the march will show in its numbers and registering could help the demonstration get its point across even before it starts.

Support for the demonstration could simply be showing up to a march, but that's just the start of what people are doing to stand with these students. In fact, big-time donations from celebrities like Oprah Winfrey and George and Amal Clooney have come in, along with other celebrities who have already donated over $1 million towards the cause.

The March For Our Lives is fast approaching, taking place on March 24, with the central march happening in Washington, D.C. and others taking place around the country. It's less than a month away, and more and more people are getting involved every day.

The March For Our Lives will undoubtedly be a huge, historic, and symbolic event, according to The Washington Post:

Shooting survivor Cameron Kasky, a junior, said the march would include a protest outside the White House in which unloaded AR-15 rifles, the weapon used by the Parkland gunman, would be destroyed. Kasky said legislators and President Trump must do more to get such weapons out of the hands of civilians.

Rallying against the NRA isn't easy, nor is trying to stand up to powerful politicians who receive donations from the association, but these students are doing it. And if you aren't able to actually attend the march in Washington, D.C., or any of the other events happening around the country, then don't register for the event. Rather, you can make a donation to the demonstration's official GoFundMe page and spread the word on social media to show your support.