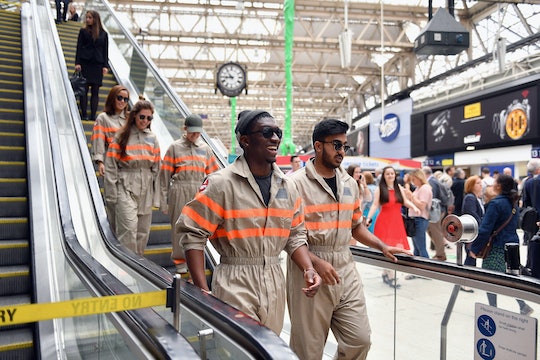 Where To Get The Ghostbusters Suits, So You Can Investigate Your Aunt's Creepy Home

There is something rather tantalizing about the idea of wandering around in a one-piece jumpsuit, don't you think? Particularly if one is looking to bust a ghost or two. Because let's face it, it's not like you're going to throw on a high-waist pencil skirt, stilettos, and a twin set if you're on the hunt for demons from the other world. Especially if there is slime involved. So, if you're looking for some appropriate attire to track down some ghouls, (or you have three friends and a costume party to attend) you need to know where to get the Ghostbusters suits, right?

The boiler suits worn by the ladies in the 2016 revamped version of Ghostbusters are already a hot commodity. The original 1984 movie saw Dan Ackroyd, Bill Murray, Ernie Hudson, and Harold Ramis suit up in pretty basic boiler suits outfitted with the Ghostbusters logo and of course, proton-packs. In the new movie, which stars women (much to the horror of fan boys everywhere), the new suits are pretty similar. They are grey, with white and marmalade stripes, accented by fingerless gloves and moon boots. One of the new stars of Ghostbusters (which will be in theaters on Friday), Kate McKinnon pointed out how iconic the suits really were.

“[We were] women playing scientists wearing jumpsuits, kind of ugly jumpsuits. And they made dolls of this. This has never happened,” she said, according to The Guardian.

The suits look surprisingly comfortable, and what with rompers and jumpsuits taking over the planet, a boiler suit is clearly the next logical step. Especially if it's a replica boiler suit from Ghostbusters. While no stores are carrying the new, updated versions of the women's suits, a few eagle-eyed fans spotted the props on display at Macy's Department Store in New York.

A pretty pricey updated version of the costume can be purchased for around $80 eBay, but they are selling fast. For fans eager to get into the spirit without spending a lot of money, costumes based on the boiler suits from the original movie are available. You can get anything from the authentic Ghostbusters costume (complete with proton pack), an inflatable Slimer costume, and even a Stay Puft Marshmallow man costume on sites like eBay, Amazon, SpiritHalloween, and Party City.

If you're feeling really invested, fans might even consider ordering a Ghostbusters costume for their dog.

While the costumes do look pretty comfortable (without the hefty proton packs on the back), is it really advisable to wear a Ghostbusters costume every day? Nah, I think it's more special occasion wear. Like Christmas, birthdays, weddings, to your friends home that you think is haunted... if you can get your hands on one, I bet you'll find a use for it.