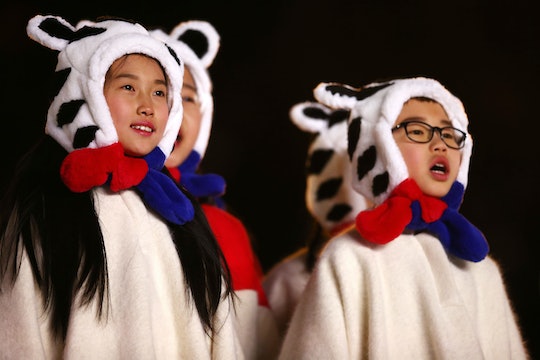 Here's Where You Can Get One Of Those Super Cute Hats Of The Olympic Tiger, Soohorang

One of the most amazing things to come out of the 2018 Winter Olympics in PyeongChang, other than the medals, of course, has to be the fashion. There's a definite look, a specific esthetic, to the Winter Games this year; from the ethereal costumed dancers at the opening ceremony, to the kids wearing warm tiger hats at the closing ceremony, it's all been great. And parents might want to figure out where to get themselves an Olympic tiger hat, because your kids are going to want them.

If you've been watching the Winter Games in PyeongChang, you've probably noticed an adorable white-and-black striped tiger theme. The official mascot of the 2018 Olympics in South Korea is Soohorang, and he's honestly everywhere. Athletes have been receiving stuffed versions of the black-and-white mascot (speaking of things I want right now), and there's even an amazing video of the mascot getting stuck in a doorway that's been making the rounds on social media.

During the two-week Winter Games there was even a daily parade featuring Soohorang, as well as being represented during a spectacular drone-created light display. But I think the kids who wore tiger hats, ostensibly symbolizing said mascot, as the solemnly sang the Korean national anthem who might have even stolen the show from Soohorang. And that's saying something.

As soon as those sweet-faced little kids showed up on stage to sing their hearts out in their adorable-yet-functional tiger hats, the internet was all about trying to find hats of their own.

So here's the bad news; it doesn't look like those particular Soohorang hats are for sale as of yet on the official Olympic store, yet anyways. Kids out there might have to satisfy their need for a furry animal hat by visiting Amazon and buying a nice tiger plush hat for the low, low price of $6.99 to tide them over for now. Here is another option for $14.99.

Yes, I know it will be disappointing because these tiger hats are clearly not based on Soohorang, but they're still cute and warm, right? If you're hoping for something that looks a little closer to the real thing, you can buy a Silver Fever animal beanie hat (with built-in mittens, thank you very much) at Price Falls Marketplace for $12.99.

I mean, they're obviously not going to be quite the same as the official Olympic hats. But I think it's probably safe to say that Soohorang hats will be available in the near future.

It seems likely that someone will want to start manufacturing these hats soon, especially when people realize how desperately fans need these commemorative/iconic hats. Not just because they're adorable, but also because of the spirit of all that Soohorang the white tiger represents. He's not just a regular old smiling white tiger, after all. According to the Olympic website, the mascot stands for much more than that:

Soohorang not only has a challenging spirit and passion, but is also a trustworthy friend who protects the athletes, spectators and all the participants of the Olympic Games.

As the historic PyeongChang Winter Games draws to a close, here is what we will remember; that there were more countries participating in these games than any other in history. That North and South Korea, two nations divided for more than 50 years, came together in the spirit of unity.

And we will remember all things Soohorang. The miniature versions of the mascots that were handed out to athletes, and the marvelous singing children wearing Soohorang hats on their heads as they sang their precious hearts out during their national anthem.

Sure, we will embrace the next mascot of the 2022 Winter Olympics in Beijing, China, which is rumored to be a panda. But we shall never forget Soohorang. Our first mascot love.

More Like This
Here's Where The 'Hocus Pocus' Characters Are 30 Years Later
Scarlett Johansson Explained The Meaning Behind Her Son Cosmo's Name
'The Proud Family: Louder & Prouder' Is Returning For Season 2 On Disney+
Hilary Duff's Daughter Mae Is Every Toddler Obsessed With 'CoComelon'