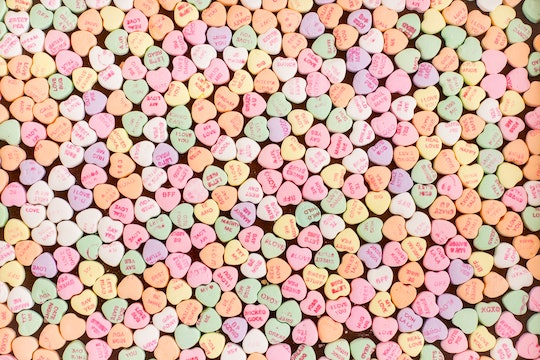 You Can't Buy Sweethearts This Valentine's Day, But You Can Still Get These Heart Candies

When Necco candy went out of business last year, it took a lot more with it than just those legendary wafers. The company also took a candy that has been a staple of Valentine’s Day for decades: Sweethearts. Those were the multicolored sugar hearts with messages like "Be Mine" and "Kiss Me" stamped on them. But, don't worry, you can still find a version of the beloved favorite, thanks to competitor Brach’s Candy. So if you're scrambling to find them before Feb. 14, here’s where to get Valentine’s heart candies because you know the holiday just isn’t the same without them.

Brach’s Candy's version, called Conversation Hearts, are sold at a variety of common retailers including Target, Walmart, and Walgreens. If you absolutely can’t get out to a place near you, then head on over to Amazon, where an 8-ounce bag will set you back $7. The classic flavors of wintergreen, banana, orange, lemon, cherry, and grape are included, along with new flavors tropical fruit, very berry, and sweet and sour, according to a press release from Brach’s.

The company is also doing more than just flavors to update the popular candy. “To further tap into trends, Brach’s adds new culturally relevant phrases and colloquialisms to Conversation Hearts on a regular basis, ensuring contemporary expressions, acronyms and emoticons are brought to life,” the company wrote in the press release.

Some people won’t be won over by Brach’s though. One Missouri resident told The New York Times, “I have not seen the Necco Sweethearts in stock anywhere this year. There is a Brach’s version on the shelves but it just isn’t the same!”

There is hope on the horizon, though, since Spangler Candy Company — makers of Dum Dums and Circus Peanuts — bought Necco in September, The New York Times reported. The company will be bringing the iconic candy back, but it didn’t have time to spool up production before this year’s Valentine’s season.

So purists may have to wait until 2020 to get their sugar fix, but for many people Conversation Hearts will suffice. But if you can’t bring yourself to enjoy anything but the OG Sweethearts, you might want to go in a totally different direction. For instance, Krispy Kreme has introduced heart-shaped conversation doughnuts with frosting in all the classic colors and sayings like "So Extra" and "DM Me," according to Thrillist.

"Finding the right word can be like, I don’t know….hard,” Dave Skena, chief marketing officer for Krispy Kreme, said in a statement. "But eating a doughnut is easy. So, we printed the right words on the doughnuts for you so you can’t mess this up."

So, really, there’s no excuse this year for not saying exactly what’s on your mind — or heart.