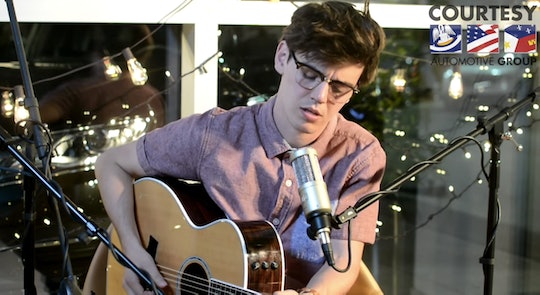 Where To Listen To Mackenzie Bourg's Original Song "Roses", Because The 'American Idol' Contestant Is Seriously Talented

You don't have to wait for the show to be over — you can listen to it on YouTube right now. The song, which has a mere 2,674 views at the moment, caught the attention of both the judges and audience members this week. "It sounds like it could be an Ed Sheeran song," Keith Urban whispered to fellow judges J. Lo and Harry Connick Jr. The judges weren't allowed to make any comments or critiques to the contestants themselves, but their whispered comments to one another at the table after noteworthy performances spoke volumes.

Audience members first met Bourg, a 23-year-old from Lafayette, Louisiana who once competed on NBC's The Voice, at the Atlanta auditions where he performed a mash-up of all three judges' original hit songs. The judges loved his performance skills, his style, and sent him on to Hollywood with a unanimous decision. The audition video on Facebook currently has over three million views.

During the Solo Round of American Idol, the contestants were challenged to sign up for a song and learn it in one night. The next morning, they performed it for the first time with the full American Idol band. This was the first time that the judges had heard the contestants perform with a full band behind them, although in the end, Bourg chose to perform solo, with only his acoustic guitar accompanying him.

Bourg, whose YouTube channel has 18,768 subscribers, has only seven videos, but fans can't seem to get enough of him. His Facebook fan page too has over 27,000 likes and the number is growing.

After splitting the contestants into groups in three separate rooms, judges then determined which two rooms of contestants stayed and which room went home. Bourg and his room were (thankfully) saved by the judges at the end of the episode.

I believe that Bourg has a bright future ahead of him in the music industry. He has the chops of Ed Sheeran with the look of a young and nerdy Justin Bieber and I can't wait to hear more of his music — and it seems that viewers at home think so too.