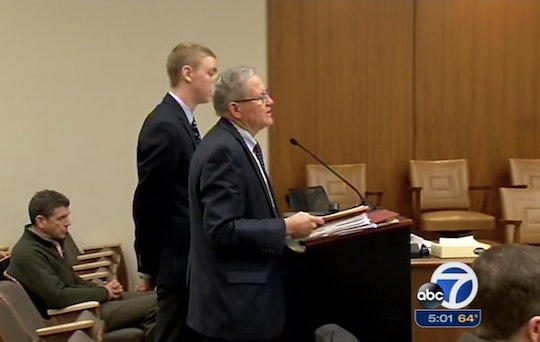 Where To Read The Stanford Rape Victim's Letter, Because Everyone Should Hear Her Story

In case you're tired of reading excerpts, there's only only place where you can read the Stanford victim's letter in full. Last Friday, Buzzfeed News was the first to obtain a copy of the letter that the anonymous victim read out loud in court, speaking to her rapist Brock Turner. The letter went viral for a few reasons. The first is that many were already outraged at what they deemed to be too light of a sentence for Turner's rape. He was facing up to 14 years in a state prison but was eventually sentenced to just six months in a county jail with probation.

But beyond the outrage of his sentencing, the victim eloquently and powerfully outlines her version of the evening and the events immediately after she regained consciousness in a hospital, where she learned she had been raped. She had no recollection of the events of the evening after going to a party with her sister on campus. The letter goes, in every detail, about what happened once the case began.

She wrote, "I was warned, because he now knows you don’t remember, he is going to get to write the script. He can say whatever he wants and no one can contest it. I had no power, I had no voice, I was defenseless."

It turned out that whoever warned her was right. Throughout the case, Brock's defense attorneys harped on the fact that there had been alcohol involved. That both were drinking, even though Turner had been caught mid-rape by two men on bikes who said they said him "aggressively thrusting" into the victim (as if rape isn't aggressive enough). Her letter is long, but it perfectly describes the rape culture that persists in our legal system and in everyday public opinion: No one was talking about the fact that Brock raped her. It was about "party culture."

Brock's attorneys even went so far as to use a phone call she made to her boyfriend that night in their client's defense:

To listen to your attorney attempt to paint a picture of me, the face of girls gone wild, as if somehow that would make it so that I had this coming for me. To listen to him say I sounded drunk on the phone because I’m silly and that’s my goofy way of speaking. To point out that in the voicemail, I said I would reward my boyfriend and we all know what I was thinking. I assure you my rewards program is non transferable, especially to any nameless man that approaches me.

It is these parts of her letter, where she is angry and clearheaded all at the same time, that moved so many people to read it and pass it around throughout the week. At the end of the letter, she gets to the heart of his sentencing and the dangers of sending a message to women in America that it doesn't matter if someone rapes them if they are unconscious and drinks.

She pleads with the judge to sentence Brock Turner severely:

What has he done to demonstrate that he deserves a break? He has only apologized for drinking and has yet to define what he did to me as sexual assault, he has revictimized me continually, relentlessly. He has been found guilty of three serious felonies and it is time for him to accept the consequences of his actions. He will not be quietly excused.

At the end of her letter she addresses women, potential and past victims, directly:

I hope that by speaking today, you absorbed a small amount of light, a small knowing that you can’t be silenced, a small satisfaction that justice was served, a small assurance that we are getting somewhere, and a big, big knowing that you are important, unquestionably, you are untouchable, you are beautiful, you are to be valued, respected, undeniably, every minute of every day, you are powerful and nobody can take that away from you. To girls everywhere, I am with you.

In her letter, she thanks everyone who helped her, from the bikers, to the hospital staff, everyone throughout her case. But really, women everywhere should thank her — for reading that letter in Brock's face in court, for having the courage to pass it along to Michele Landis Dauber, a Stanford law professor who was following the case, who passed it onto Amy Ziering, producer of The Hunting Ground, who then rightly chose BuzzFeed as the perfect outlet to get her message out. For having the guts and wherewithal to somehow make sense of such an insane and infuriating incident.

There are so many components to her letter that it is easy to see why it touched people so deeply and outraged so many. There are excerpts everywhere, of course, now but you should do yourself a favor and read it in full, to hear her story.

Be warned, though: If you were already angry about Brock Turner's sentencing, it will make you angrier.