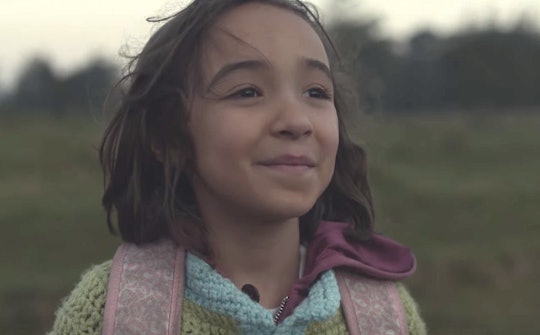 On Super Bowl Sunday, one mysterious-looking commercial caught many people's attention: An ad by 84 Lumber ended on a screen directing viewers to their website, where viewers were told they could finish watching the commercial reportedly deemed too controversial for television. Those wondering where to watch the full 84 Lumber ad will need to head online to see the conclusion to 84 Lumber's story.

The Pennsylvania-based construction supply company told The New York Times that it had reportedly been forced to cut the aired portion of its ad short because Fox reportedly considered 84 Lumber's depiction of a border wall too controversial. In the ad, a mother and daughter embark on a journey that takes them across rivers, farms, and cities — but the commercial ends before the two come upon a border wall. According to The New York Times, the wall could logically be interpreted as the United States-Mexico border wall President Donald Trump has vowed to build.

"I still can’t even understand why it was censored," 84 Lumber president Maggie Hardy Magerko told The New York Times. "In fact, I’m flabbergasted by that in today’s day and age. It’s not pornographic, it’s not immoral, it’s not racist."

So how can viewers catch the full commercial?

84 Lumber hasn't released the ending of the commercial just yet, but at Super Bowl half-time, viewers can head to Journey84.com and finish watching the fictional mom and daughter's trip. (No word on whether or not the commercial's ending will stay online after half-time — but chances are the full ad will become available to the public.) On its website, 84 Lumber invites viewers to "complete the journey," with a warning that reads, "Contains Content Deemed Too Controversial for TV."

According to Bloomberg, 84 Lumber isn't the only 2017 Super Bowl advertiser out there offering up a controversial commercial. Budweiser's "Born the Hard Way" ad features an immigrant's struggle to get to the United States, while other ads — focusing on Mexican avocados, Skittles, and car companies — could remind viewers of American political issues (and certain presidential tweets) both past and present.

While political controversy might get ad viewers talking, a Northwestern University marketing professor told Bloomberg that it's a risky proposition. "Most executives really don’t know how to best handle Donald Trump," he said. "You don’t want to be seen as being against Trump or for Trump."

Regardless of how viewers interpret 84 Lumber's ad, one thing's for sure: The full commercial will definitely get people talking.