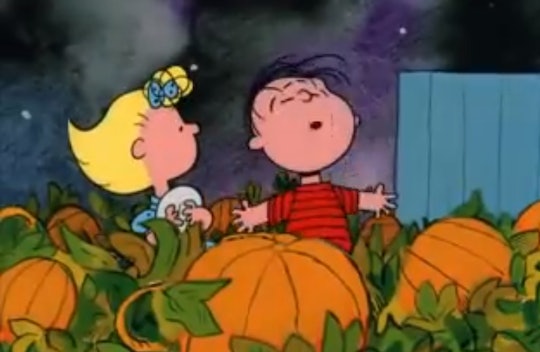 Here's Where You Can Stream 'It's The Great Pumpkin, Charlie Brown' In 2020

It’s that time of year for beloved and fun traditions: cozy sweaters, pumpkin spiced everything, raking leaves, picking out Halloween costumes, and watching some of the best TV programming of the year. For many families, the fun kicks off every year with the pre-Halloween viewing party of a decades old Peanuts' classic, so here's all the info you need to know where to stream It’s the Great Pumpkin, Charlie Brown.

The special has found its home on Apple TV+. If you have a subscription, you can stream It’s the Great Pumpkin, Charlie Brown any time of the year. A Charlie Brown Thanksgiving and A Charlie Brown Christmas will also make their way to the streaming service this holiday season, in addition to new Peanuts originals.

While the autumnal animation has aired on ABC during primetime hours in years past, the 2020 air dates for It’s the Great Pumpkin Charlie Brown have not yet been announced. There is a chance that it could air at some point throughout the month of October — in 2019, the special aired twice on ABC leading up to Halloween. If this is the case this year, you can watch the special online with ABC’s website or on ABC’s app where you can watch live TV with your cable log in. But if you’re not fond of waiting and want to watch it right now, you might need to do some digging.

You can kick it old school style this year by purchasing a DVD or Blu-ray of It’s the Great Pumpkin Charlie Brown from retailers like Target or Best Buy, which are both currently selling the special for $9.99. If you’re a big fan of Amazon, then you will have to purchase a used copy of the Peanuts classic, because it is currently out of stock online. This will require you to grab that decades old DVD player from the depths of your storage closet, but will be worth it, especially if watching the special is a family tradition.

The holiday special was once available to purchase on Amazon Prime Video and rent on iTunes and on YouTube for a cost, but now it is no longer available. If you’re less about the visuals and more about the amazing score, the soundtrack is also available on iTunes for just $7.99. For now, It's the Great Pumpkin, Charlie Brown doesn't appear to be available on Netflix.

In the interest of being thorough, it’s also worth mentioning that the 1966 classic been shown so many times that some people have pirated it and put it up on video streaming services like YouTube and DailyMotion. As always, if you choose to watch unofficial videos on these sites, remember that quality and content could vary. And, of course, it’s not a bad idea to preview anything you watch on these sites before you let little eyes sit down to watch. Unfortunately, you never know what someone could be editing into these seemingly safe videos for kids.

It’s The Great Pumpkin, Charlie Brown first premiered in 1966 and tells the story of Linus camping out in the pumpkin patch hoping to see the alleged Great Pumpkin, and Charlie Brown’s unlucky trick-or-treating endeavors has become one of the best half-hours in TV history. Who doesn’t get warm fuzzies when remembering Charlie Brown’s botched ghost costume or Snoopy’s fantasy of the Flying Ace? These moments are so deliciously classic that Snoopy in an astronaut’s helmet became the mascot for the Apollo 10 space mission, according to TV Guide. They even named their command module Charlie Brown, and called the lunar module Snoopy!

Although there might be fewer ways to watch It's The Great Pumpkin, Charlie Brown than in years past, it’s still possible to honor that timeless family tradition. Grab the candy corn, a caramel apple, a pumpkin spiced latte, and the kids for what’s sure to be a great Halloween.

This article was originally published on Oct. 19, 2018