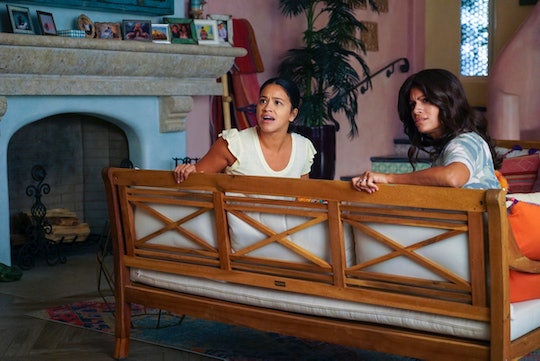 Yes, You Can Watch 'Jane The Virgin' Even Without A Cable Subscription

The CW's hit telenovela is in its final season, but trust me when I say, things are not slowing down for the Villanueva women. You need to know where to watch Jane The Virgin Season 5 because it's not on Netflix yet, and the wait might be too long to handle.

Warning: Spoilers for Season 5 of Jane the Virgin ahead.

First things first, new episodes of Season 5 air on the network Wednesdays at 9 p.m. ET. You can also watch the five latest episodes of the season on The CW website for free — no cable subscription needed. The newest episode becomes available every Thursday. This is the only way to watch the most current episodes. But if you need to catch up on any previous seasons or have yet to start the show — what are you waiting for? Seasons 1-4 are on Netflix right now.

Jane has made her final decision between Michael and Rafael. Not only am I happy with her choice, I'm so relieved that Jane The Virgin creator Jennie Snyder Urman confirmed for TV Guide that it will stick. Rafael is who Jane wants — she just has to fight to win his trust back. That's fine with me, because I understand how he's feeling. I'm just thrilled that Urman ended the triangle. Even love triangles written as well as Michael/Jane/Rafael become exhausting after five seasons.

I'm not sure how Jane's story will end, but I know she'll be fine. However, I need to discuss Xiomara because her future is so much more uncertain than Jane's. As you may know from Season 4, Xo has cancer, and she's not doing well right now.

Xo has broken ground in Hollywood for Latina representation, and the actress who plays her, Andrea Navedo, knows it. "I'm really proud of the journey that Xo has had over the five seasons," she told ET. "She's not just a one-note, sexy, beautiful Latina woman who... that's all she does. She's so much more than that. She's a mom. She's always been a dedicated, hardworking mom. She's an aspiring artist. She's always had to deal with some real-life situations like having an illness. I love that fact that they have taken that on."

You all agree Xo has to live, right? I mean, Jane, Mateo, and Alba can't live without her — and neither can I. I'm worried because the show has done such a good job portraying illness in a realistic way. There are tons of medical dramas on the air that are trying, but none have quite captured the humanness of illness like Jane The Virgin in my humble opinion.

Xo's cancer battle was an important story for Navedo to tell because she lost a loved one to the disease. "It was really important to me that I portrayed it in a very real way, a very grounded way, and that it wasn't melodramatic and super over the top with sorrow. I wanted it to be real and human," she told ET.

I might be talking about a telenovela, but this story in particular has felt very real so far. In real life, cancer sometimes takes lives. That means Xo might die. But Navedo is staying quiet. "You'll have to tune in to find out," she told ET. If you want to follow along with Jane The Virgin's final season in real time, log on to the CW right now!