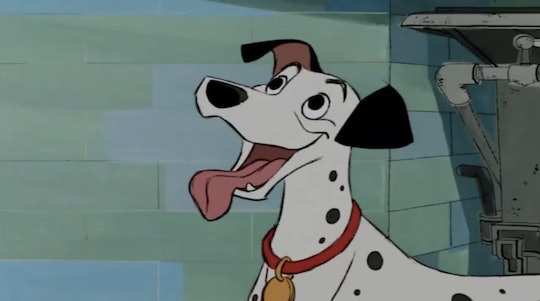 Where To Watch The Original '101 Dalmatians', So You're Prepared For The 'Cruella' Reboot

If I could have any theme song on the planet, I would like it to be the "Cruella De Vil" song from the original Disney version of 101 Dalmatians. Do you remember it? It was brilliant. Catchy and funny and sort of sweet. I don't want to actually be like Cruella De Vil, you understand, but you can't deny she had a pretty cool theme song. (Not to mention a killer wardrobe and her own henchmen. A girl could do worse.) So with a new live action reboot about the villain set to hit theaters in the next few years, it stands to reason that you're probably wondering one thing: Where can you watch the original 101 Dalmations these days, in order to get yourself psyched up?

Now that Disney has confirmed the news that they will be creating a spin-off from the 101 Dalmatians movie all about Cruella herself (appropriately titled Cruella) with Emma Stone in the titular role, we're all going to want to rewatch the original movie. I'm not going to lie to you, I've probably seen it about 45 times. My oldest son was obsessed with it and watched it every morning with his breakfast (don't judge). And even after memorizing the movie word for word, I am happy to watch it again.

There is a reason Disney is revisiting its older movies... they were magical. They were able to hide some fairly distressing storylines behind clever song and dance numbers, because let's just take a moment to acknowledge that Cruella was trying to skin those pudgy little Dalmatian pups and turn their hides into a fur coat. A fact which escaped my sons' notice every time.

The original 1961 production was based on the book written by British author Dodie Smith's 1956 novel of the same name, the One Hundred and One Dalmatians. The movie tells the story of gorgeous Dalmatians Pongo and Perdita, who find love (along with their people, songwriter Roger Radcliffe and his new bride Anita) in London, England. From that fade-to-black love come 15 delicious little puppies — poor Perdita — and Anita's college friend Cruella Do Vil, who wants to get her hands on a very distinct style of fur coat. (Oddly, your children probably won't notice the stomach-turning plot points. They will see roly poly spotted puppies outwitting the Bad Lady, which is probably a good thing.)

While the movie isn't available for streaming on Netflix (although the 1996 live action remake starring the inimitable Glenn close as Cruella De Vil is available), it is available on websites like disneymoviesanywhere.com. The entire movie is also available to download free on Youtube, if that's the route you'd like to take.

You could also go the old-fashioned route and buy it on dvd or Blu-ray, because you know your kids are going to want to watch the puppies over and over. And you're going to enjoy getting reconnected with the puppies, the over-the-top henchmen, and the pure unadulterated silliness that was 101 Dalmatians as well.