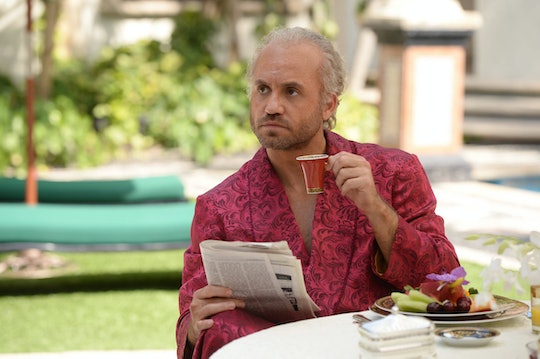 This Is Where The Real Gianni Versace Was Buried?

The premiere episode for The Assassination of Gianni Versace began with Gianni Versace's death at the hands of Andrew Cunanan. With eight episodes left in the season, the series will most likely jump around in time, but it'd make sense if the next episode showed Versace's burial service. So where was Versace buried?

It may interest you to know that Versace's body was cremated and his ashes were returned to his family's estate near Cernobbio, Italy, and buried in the family vault at Moltrasio cemetery near Lake Como, according to The Mirror. A memorial service was held for him a week after his passing and was filled with a number of celebrity guests, including Naomi Campbell, one of Versace's favorite models, Princess Diana, Elton John, and, of course, Versace's family, including his younger sister Donatella.

Other notable people in attendance were Sting, fellow designers Giorgio Armani, Karl Lagerfeld, Carla Fendi, and Tai Missoni, and Carolyn Bessette, the wife of John Kennedy Jr. At this point authorities were still on the hunt for Cunanan, but he was found eight days after the murder at a Miami houseboat, though he killed himself before he was able to be formally convicted of any crime.

It's unclear just how much of all of this American Crime Story will show this season, in terms of the aftermath of the killing of Versace. But since they began with the murder they certainly have the time to go into the manhunt for Cunanan and what that looked like. Even in the first episode, the show already seems to be making a commentary about how the case was handled.

Although the show is of course at it's core about the assassination of Versace, it looks like it'll also be taking a closer look at gay culture in the '90s, and how that affected both Versace and Cunanan, in very different ways. The fear of coming out of the closest in particular, will probably be a big theme this season as well. This is similarly to the way in which last season, The People v. O.J. Simpson, took a hard look at race in the '90s and how that played into Simpson's trial.

Of course, this season is tackling the story in a very different way. Rather than following the court case (since there wasn't one), the show will reportedly be moving back in time to show the events leading up to the assassination, from the perspectives of both Versace and Cunanan. There was a hint of that in the premiere episode with the flashback to when Cunanan and Versace first met and how Cunanan was able to talk his way into the VIP area with Versace. (Though it still remains unclear to this day whether or not the real Versace and Cunanan ever knew each other, especially considering that Cunanan was known to lie all the time.)

For their part, the Versace family released multiple statements about the FX series, which is based on Maureen Orth's book Vulgar Favors, calling it a "work of fiction." So it's impossible to know what Versace and Cunanan's relationship was really like — or if it ever existed in the first place. Either way, I'm definitely interested to see the direction in which this series goes from here. Maybe viewers will even be given a glimpse of Versace's funeral and burial site.

You can tune into FX Wednesday, Jan. 24 at 10 p.m. EST to catch the next episode of The Assassination of Gianni Versace.