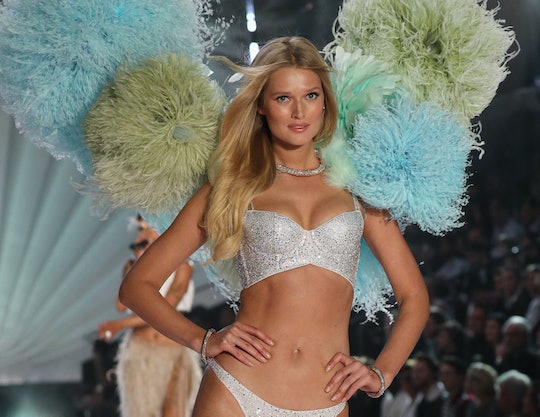 Just like the inaugural show (and several others in the past), this year's Victoria’s Secret fashion show was in New York City. According to Billboard, the show took place at Pier 94 for the very first time. As explained by NYC Go's website, Piers 92/94 are joint special event venues located on 55th Street and the West Side Highway. Pier 94 is 133,000 square feet of high-ceilinged ceilinged open space, and has hosted events including The Armory Show and Architectural Digest Home Design Show, so it sounds like the perfect venue for such a high-profile fashion show.

The first Victoria’s Secret fashion show was located at New York City's iconic Plaza Hotel, back in 1995, as per Business Insider. The annual show remained at the Plaza through 1998, and in 1999, it moved to Cipriani Wall Street, which was also the first show to be aired via webcast (still not on TV yet).

In 2000, the Victoria's Secret fashion show moved to Cannes, France, and in 2001, back to New York City, at Bryant Park, which was also the first year the show aired on TV. Since 2001, the show has steadily been presented at NYC's Lexington Avenue Armory, with a few other cities (Miami, Los Angeles, London, Shanghai, and Paris) in between, as per Business Insider. There's no place like home, and that's certainly true for the Victoria's Secret angels!

That said, just because the show is airing this Sunday doesn't mean you should expect to see the Victoria's Secret Angels bopping around NYC. The show actually took place a few weeks ago, on Nov. 8.

17 of the 18 Victoria's Secret angels are expected to appear on the runway when the show airs on Sunday, with the exception of one very pregnant Lily Aldridge. As noted on the Victoria's Secret website, the current angels are: Adriana Lima, Alessandra Ambrosio, Behati Prinsloo, Candice Swanepoel, Lily Aldridge, Elsa Hosk, Jasmine Tookes, Josephine Skiver, Lais Riberio, Martha Hunt, Romee Strijd, Sara Sampaio, Stella Maxwell, and Taylor Hill. Plus, plenty of other non-angel models will also be featured including Kendall Jenner, Bella Hadid, Gigi Hadid, and Winnie Harlow, as per Harper's Bazaar.

In addition to all the fabulous models, the fashion show's musical lineup is pretty sweet. According to Vox, Halsey, the Chainsmokers, Shawn Mendes, Kelsea Ballerini, Rita Ora, Bebe Rexha, and the Struts will all be performing live music for the models to strut down the runway to.

The Victoria’s Secret fashion show will premiere on ABC this Sunday, Dec. 2 at 10 p.m. The showing can also be live-streamed on ABC's website or on the ABC app. Happy strutting, friends.