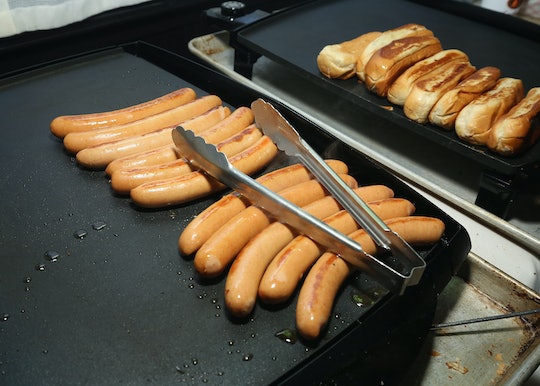 Which Bar-S Hot Dogs Have Been Recalled? Check Your Hot Dogs Before You Grill Them

Well, it looks like there might be some more bad news for avid barbeque fans out there: another recall was recently announced. This time around, it looks as though the culprit was summer's best friend, the hot dog and it's faithful cousin, the corn dog. The United States Department of Agriculture announced the latest recall due to listeria concerns, but which Bar-S hot dogs have actually been recalled?

According to the USDA, the Altus, Oklahoma-based Bar-S Foods has had to recall more than 372,000 pounds of hot dogs and corn dogs made earlier in the month. The company is recalling five of its pork and chicken products due to listeria concerns at its processing plant. While there have not been any reports of illness as of yet, and the company has yet to receive test results, it is taking the necessary precautions to protect consumers. The products were made between July 10 and July 13, and are being removed from shelves. In its official news release, the USDA shared which specific products were being recalled.

Listeria tends to affect pregnant women, older adults, newborns, and people with weakened immune systems. While it's not impossible for people outside these risk groups to be affected, it is much less likely. The USDA reported:

Listeriosis can cause fever, muscle aches, headache, stiff neck, confusion, loss of balance and convulsions sometimes preceded by diarrhea or other gastrointestinal symptoms. An invasive infection spreads beyond the gastrointestinal tract. In pregnant women, the infection can cause miscarriages, stillbirths, premature delivery or life-threatening infection of the newborn. In addition, serious and sometimes fatal infections in older adults and persons with weakened immune systems. Listeriosis is treated with antibiotics. Persons in the higher-risk categories who experience flu-like symptoms within two months after eating contaminated food should seek medical care and tell the health care provider about eating the contaminated food.

Anyone who might have purchased these items is encouraged to either dispose of the products or return to the point of purchase for a refund. So check your freezers, everyone.