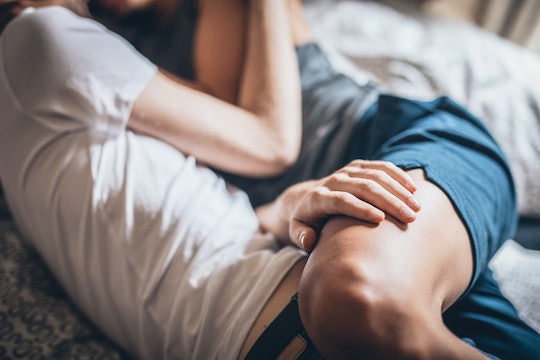 If You Need Your Birth Control To Work Right Away, These Are Your Options

If anybody needs her birth control to work — and work now — it's a mom who's decided that she's done having kids (at least for the moment). Because there’s nothing like staring down a pregnancy stick while a toddler bangs on the bathroom door and a baby cries from the other room... especially when you thought that you were covered, contraception-wise. So which birth control works the fastest? It truly depends on what you want out of your BC.

“There are several factors that go into choosing a birth control method, and for some people, the decision is based on which method starts working the fastest," Courtney Benedict, CNM, MSN, associate director of medical standards implementation at Planned Parenthood Federation of America, tells Romper.

If you're looking for coverage that'll work right away, you can basically rule out hormonal birth controls (like the pill). “Contraception that works immediately includes condoms, diaphragms, or other barrier forms," OB/GYN Christine Greves, M.D. tells Romper. The good news is that most of these methods are also available over-the-counter and easy to use, so you can take advantage whenever the mood strikes.

That said, there are disadvantages to barrier methods (from latex sensitivity to a limit on spontaneity) that might have you looking for the next most immediately effective type of coverage. “Aside from barrier methods like condoms, the copper IUD is effective immediately after it is inserted, which is also why it's the most effective form of emergency contraception," says Benedict. "Unlike other forms of birth control, the copper IUD is non-hormonal and works to prevent an egg from getting fertilized by stopping the sperm and egg from meeting."

Your options don't end there, but the wait begins. You can't expect immediate coverage from the pill or the patch; you might, however, be able to expect coverage pretty soon.

“If you’re relying on the body to make changes physically or chemically, your birth control can possibly take longer depending on when you start taking it or have it inserted,” says Greves. “For example, if you start taking hormonal birth control (the pill, a hormonal IUD, implant, patch, or ring) within the first five days of the first day of your period, it's possible for it to be effective for pregnancy prevention within a week.” But since no two menstrual cycles are the same, you might need some backup BC… just in case. “I would strongly advise using a barrier method in addition to any hormonal method for the first month to have that extra insurance,” adds Greves. So keep some type of barrier method contraception handy.

Your method of birth control is a completely personal choice, and you might find your needs change over time. That's why knowing your options is so important.