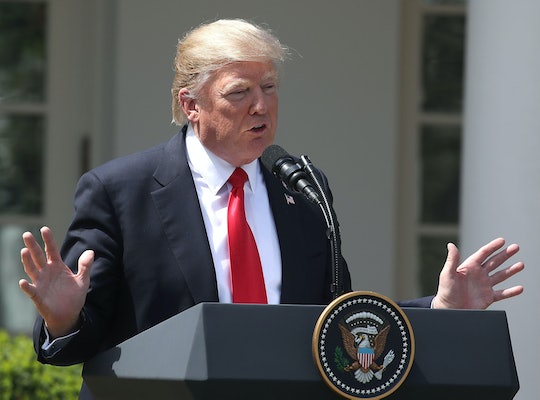 Here's Which Countries Support The Airstrike In Syria

In a move that got the world talking on Thursday, President Donald Trump issued a military strike against a Syrian military base, elevating the situation in the country to what the International Committee of the Red Cross is now calling an "international armed conflict," according to Reuters. But as the world talks, what exactly are different world leaders saying? Which countries support the airstrike in Syria, and which have expressed criticism of the United States' actions?

Not everyone has spoken up yet, but so far, those who have chosen to comment on Trump's military strike have mainly responded positively. That doesn't include, of course, a few major players who are unsurprisingly unhappy with the president's decision — i.e., those who have historically sided with President Bashar al-Assad's regime in Syria.

Several others have simply called for international players to remain calm during turbulent times, with United Nations Secretary General António Guterres appealing to the leaders involved to take a step back. "Mindful of the risk of escalation, I appeal for restraint to avoid any acts that could deepen the suffering of the Syrian people," he said on Friday, according to The Guardian.

But where does everyone else fall when it comes to supporting or standing against the United States' actions?

So far, government leaders in several countries have expressed support for Trump's military strike against Syria. Those who have approved of the action include the following, according to The New York Times:

It's not hard to guess which countries' leaders have disapproved of the military strike so far. According to The New York Times, Iran, Syria, and Russia have all strongly condemned the attack, with both Russia and Iran pointing out the breach of international law.

China and Sweden have both erred on the side of neutrality, condemning the chemical attack in Syria but urging a political solution to the crisis.

So what comes next? No one is really sure. After the United States' military strike, the Russian Foreign Ministry said Russia would be suspending a 2015 memorandum with the United States. The memorandum allowed the countries to exchange information in order to keep both countries' planes safe in the airspace over Syria, according to The Independent. Russian President Vladimir Putin also spoke out, saying the decision to strike Syria had dealt a serious blow between Russian-American relations.

The coming days should bring more information from the United Nations, the United States, and others involved in the conflict. And while there's been no definitive word on what's next for Syria, it's clear that countries around the world are drawing their lines in the sand.