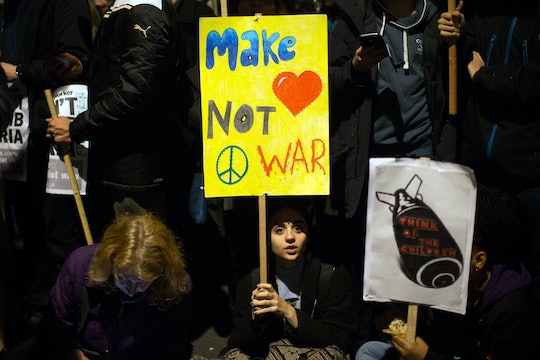 It has only been two days since a deadly chemical attack in Syria claimed the lives of at least 70 civilians, including children. Two days for the rest of the world to condemn the airstrike and the man reportedly behind it, Syrian leader Bashar al-Assad. Two days for the Trump administration to decide how it might respond to the vicious attack. As the Pentagon has begun formulating a possible retaliation, American families are justifiably worried about whether or not the United States will send troops to Syria.

Secretary of State Rex Tillerson spoke to reporters about the attack on Thursday, according to CNN, as well as the possibility of an "international community effort" to oust Assad and defeat ISIS. Tillerson went on to say that there was "no doubt in our minds, and the information we have supports, that the Syrian regime and Bashar al-Assad are responsible for this attack," and that the Russian government should "consider carefully their continued support of the Assad regime."

These statements from Tillerson are a decidedly different tune from the stance he was touting last week in Turkey; At that time, Tillerson (who has been criticized for his previous close ties to Russia) said:

I think the status and the longer-term status of President Assad will be decided by the Syrian people.

Now that the Trump administration has gone on record condemning Assad's actions (Trump himself said he was very upset about the "beautiful babies" who were killed, adding that the chemical attack by Assad "crosses many, many lines"), what will be the next step for the United States? Trump is reportedly planning to meet with his national security team at Mar-a-Lago later on Thursday to discuss details of possible military intervention. But will he follow through?

Two senior defense officials spoke on condition of anonymity with The Daily Beast this week about the Pentagon's plans, saying that there are certain things in the works to retaliate against Assad that are reportedly going to be presented to President Trump in the near future:

We're in the options business. Logical targets include aircraft, chemical plants, areas of production, storage and delivery of chemical weapons.

While there has been no definitive word given as to whether sending more U.S. troops are part of the Pentagon's plans, this hasn't been ruled out as an option either. At this stage, President Trump has said he has not yet discussed the possibility of military action with Congress, but is planning on talking options with Mattis, according to CNN.

For now, according to the officials, the Pentagon's most viable plan is to effectively hobble Syria's air force by attacking military targets. Tillerson, Defense Secretary James Mattis, and Army Lt. Gen. H.D. McMaster have been engaging in talks since the attack on Tuesday to make decisions about how best to move forward, according to The Boston Globe.

The U.S. government already has hundreds of troops in Syria as part of a coalition effort, as well as an aircraft carrier in the Middle East and other military devices at the ready. As the Trump administration works towards making decisions regarding sending more troops to Syria... American families wait. And worry.