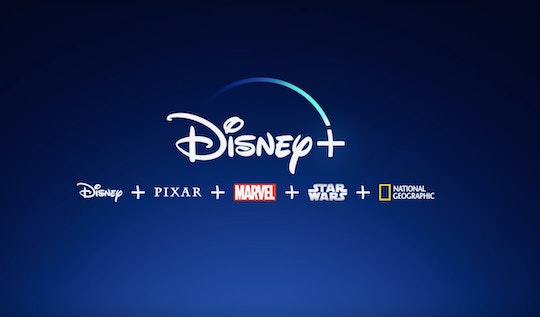 It's going to be a really exciting fall for all you Disney lovers out there (and the parents of them). With streaming services slowly but surely eclipsing cable TV, many networks are starting their own, independent streaming services, including Disney. With so many new titles that are going to be available soon, it's fair to wonder which devices support Disney+, so you're totally prepared for when it finally launches on Nov. 12.

More Like This
‘Bluey’ & More Great Shows Your Kids Will Love To Stream On Disney+
The Great-Granddaughter Of Alice In Wonderland Is Getting Her Own Show
New Disney Junior Show Aims To Help Kids “Navigate Real-World Issues Of Racial Injustice”
If Your Kid Can’t Get Enough Dinosaurs, They’ll Love These 20 Shows

The Disney+ streaming service is a lot more than just your favorite animated classics. In fact, Disney owns many of the studios that produce the biggest blockbusters of the past few decades, like Pixar and Marvel, as well as Star Wars and National Geographic, as TV Guide reported.

Be this as it is, there's really a lot at stake when it comes to determining if you want to get a subscription. Of course, you probably want to ensure that your devices will support the service first. And, according to Polygon, Disney recently confirmed that Disney+ will work with several devices:

However, as CNET reported, it's not clear if Disney+ will be available for Samsung users and Amazon Fire TVs. Reports thus far haven't explicitly stated that Disney+ isn't supported by Samsung and Amazon Fire, but if those are the devices you rely on, you may want to look for other viewing options before you lock down a subscription.

Speaking of subscriptions, though the service doesn't officially launch for another few months, pre-orders have actually begun, and for a pretty great deal, too. Users can now pre-order the service for $140.97 when you sign up for three years at once, according to Lifehacker. If this seems steep, it really isn't. First, the offer cuts $23 off the annual price if you were to sign up on a yearly basis. Second, the cost actually just amounts to $3.92 per month, as opposed to the standard $6.99 per month it will cost for users who do not take advantage of the pre-order deal. However, to scoop up this promotional deal, you'll have to act quick because it's only available for a limited time.

As for that that price gets you? Well, it's actually quite a lot. According to Thrillist, the company has previously stated that the streaming service will offer more than 7,500 episodes of Disney Channel shows as well as 500 films. According to Deadline, the service will also include fan favorites from Pixar and Marvel, such as The Avengers, as well as yet-to-be-released movies and shows, such as the Lizzie McGuire sequel and the live-action remake of Lady and The Tramp.

All in all, it's exciting to be able to access so many of our favorite shows and series in one place. It seems there's no doubt that streaming is the future, and it's nice to know that the old school Disney is part of it.