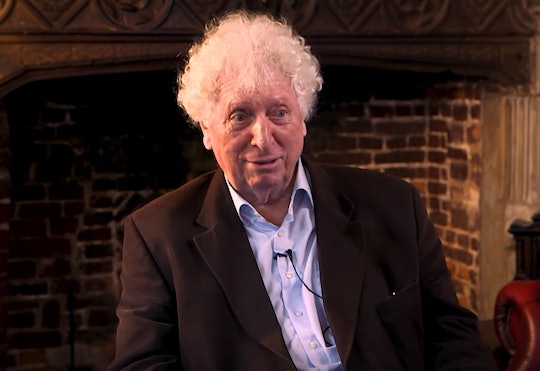 The Doctor In 'Doctor Who: The Lost Episode' Is A Big Part Of The Show's Past

Since the show first aired in 1963, fans of the British science fiction series Doctor Who have met countless versions of the title character played by a number of different actors. Over the years, there have been hundreds of episodes and TV specials and now, the BBC will air the newest one on Thursday at 8 p.m. ET on BBC America. The Doctor who stars in Doctor Who: The Lost Episode is none other than Tom Baker, who originally portrayed the fourth doctor, from 1974-1981 in seven different seasons of the long running series.

Before you wonder how the now 84 year old actor reprised his role as one of the earliest doctors of Doctor Who, you should know that the episode is actually a remastered version a unique live action/animated episode that never aired on television during Baker’s seven season run. Although there have been a number of different Doctors over the years and that number keeps steadily rising to include other talented actors, Baker is actually the one Doctor who’s had the longest run on Doctor Who overall.

So not only is Doctor Who: The Lost Episode kind of a big deal, but it’s even more important that when it was originally filmed.

These days, Baker is still famous for his role as the fourth doctor on Doctor Who. In fact, he returned to the set in 2017 to film new scenes to go along with the remastered and improved Lost Episode. According to The Guardian, the 1979 episode was never finished due to a BBC strike and at the end of last year it got its ending — complete with some fresh new scenes featuring the present-day Baker himself.

And rest assured, Baker holds the part dear to him even to this day as he told The Guardian. "I think it never left me and that’s why I can’t stay away from it," he said. "It was a lovely time of my life. I loved doing Doctor Who because it was life to me. My real life was really rather drab compared with the life of Doctor Who when we were making it." He also said that when he was filming his seven seasons of the show, it made him the happiest to stay in character while "making silly suggestions or pulling funny faces to make actors laugh."

Since his time as the doctor in Doctor Who ended, Baker has done a ton of voice work. If you hear him talk just once, you’ll probably understand why, as he has the most soothing voice imaginable. He’s lent his voice as the narrator on Little Britain in America, a sketch comedy show, as well as Little Britain, a computer game. He’s also done audiobook work in the past with A Christmas Carol produced by BBC AudioGo and had a couple of roles in the BBC series Strange and Monarch of the Glen.

Baker wasn't the first Doctor there ever was to delight and transfix viewers of the much loved series and he definitely wasn’t the last either. But Baker clearly cherished his time as the iconic character. To make Doctor Who: The Lost Episode work, he went to the studio and got back into character. He may have thought he left it all behind years ago, but he was quick to return and really make the TV special worth all of the time and effort. There's little doubt that this Doctor Who special will be one for the books.