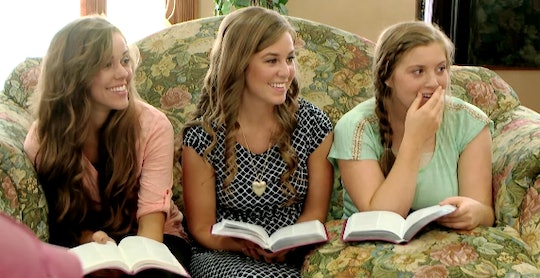 Any Counting On fans out there are likely aware that there's been quite a boom of Duggar babies as of late. Several of the Duggar kids have started families of their own, and jokes are often made about how many of the Duggar daughters have to deal with issues like the "Duggar head" during labor and delivery, and how many of them have had large first babies. But which Duggar daughter had the biggest baby at birth? All the Duggar grandbabies have weighed in at very healthy weights at birth, but one daughter recently took the crown for having the biggest Duggar grandbaby yet.

On Monday’s Counting On episode, Jinger, Joy, and Kendra got together at Jessa's house for a little "pregnant sisters" get together. During that event, Jessa warned them all of the huge "Duggar heads" that many of the Duggar grandkids have at birth, according to The Daily Mail. And one of the sisters in particular ended up exceeding even those expectations.

Joy-Anna Duggar Forsyth and her husband, Austin Forsyth, welcomed their son, Gideon Martyn Forsyth, on Feb. 23, according to People. Joy-Anna hadn't wanted to have a C-section if she could help it, but after her midwife figured out baby Gideon was breech after Joy was in labor for over 20 hours at home, the couple headed to the hospital. And there, they welcomed the biggest Duggar grandbaby yet.

When Gideon was born, he weighed in at an impressive 10 pounds, 3 ounces. By comparison, the average birth weight for babies is around 7.5 pounds, according to the University of Michigan Health System. Clearly, Gideon and his birth story are anything but average.

Other Duggar daughters and daughters-in-law have welcomed new babies recently, but none were quite as big as Joy's son at birth. Joseph Duggar and Kendra Caldwell Duggar, for example, became parents for the first time when their son, Garrett David Duggar, was born on June 8, according to E! News. He weighed in at 7 pounds, 8 ounces, so he was a couple pounds lighter than the cousin he's so close in age to.

Then there's Jinger Duggar Vuolo and Jeremy Vuolo's daughter, Felicity Nicole Vuolo. She was born on July 19, and weighed 8 pounds, 3 ounces at birth, according to Us Weekly.

The University of Michigan Health System reported that boys are usually a little heavier than girls at birth, but Gideon probably seemed like he was already a couple months old compared to Garrett and Felicity when they were born.

Grandma Michelle Duggar predicted that Gideon would weigh around eight pounds on the most recent Counting On episode. Her husband, Jim Bob, noted that baby Gideon's head circumference was 15 inches, and Michelle said the biggest of the babies she gave birth to was 14 inches, according to The Daily Mail. So Gideon was a big baby in more ways than one. He was also born measuring 22 inches long, according to People.

Initially, Joy wanted a home birth with Gideon, but his breech status eventually made it so she had to have an emergency cesarean delivery. She told People:

Before I went into labor, having a C-section was my greatest fear. That was one of the things that I was scared of. I didn’t want to have to have a C-section.

But, by that point, I was really just like, ‘Whatever it takes I’m ready.’ I was exhausted. I was just ready to get the baby here in any way possible.

And thankfully, both mom and baby came out of the labor healthy and happy. It might not have been the birth plan Joy had planned, but she ended up with a big, healthy little boy out of the ordeal, and the health and safety of both Joy and Gideon are what really mattered in the end.