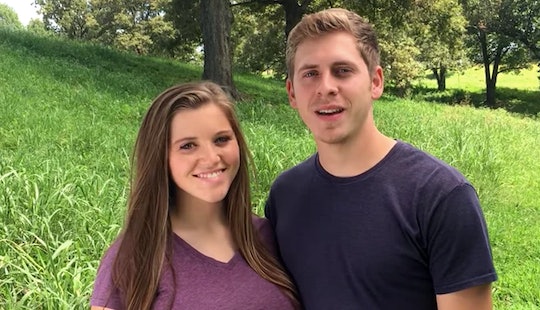 These Theories About Joy-Anna, Jinger, & Kendra's Due Dates Could Be Onto Something

It always seems like the Duggar family is expanding, because they are (most of the time). And most recently, the family of 19 children really is expecting and expanding by several more. Over the past few months, it was announced that three Duggar siblings are expecting children in the new year, but due to the private nature of the family, it is a little unclear which Duggar is due first. Luckily, fans have put together some pretty strong theories that might have you convinced when the babies will arrive.

It is a little impossible for anyone to remember all of the names of the 19 Duggar kids (although it helps that their names begin with the letter "J'). But this year, you only have to remember the names of three Duggars — Joy-Anna, Jinger, and their sister-in-law, Kendra — because these are the Duggars who are all officially expecting their first children in 2018. Although there is plenty of time for their other siblings to announce that they could also be expecting, all eyes are on Joy-Anna, Jinger, and Kendra as their bumps continue to grow.

Although none of these women have come out and said when they're exactly due, fans have some serious theories about the Duggar due dates that are pretty convincing.

In August, just three months after her wedding, 20-year-old Joy-Anna announced that she's expecting her first child with husband, Austin Forsyth. At the time, Joy-Anna expressed her excitement to People about raising a child. "I'm most looking forward to watching Austin as a dad and raising children together with him," Joy-Anna told People.

Since then, Joy-Anna has been pretty quiet about her pregnancy, only taking to Instagram to occasionally keep fans updated. But in October, according to In Touch Weekly, Joy-Anna updated fans on Instagram with one very telling detail — her fetus kicked for the first time and that her baby was the "size of a bell pepper" — which could indicate how far along she is.

A fetus kicks for the first time around 17 weeks, according to Fit Pregnancy, and is the size of a bell pepper — which is the equivalent of measuring 5 1/2 inches long and weighing almost 7 ounces — according to Baby Center, around the 18 week mark.

If Joy-Anna was 18 weeks pregnant in October, and a full-term labor is 40 weeks, you can do a little math to conclude that Joy-Anna could be due around February or March, so there is little time left before the baby's arrival. Fans also believe that Joy-Anna is due in February because, according to CafeMom, there is an Amazon baby registry attached to her name with a listed due date of Feb. 22. Because of the timing of her announcement (which came first), one could easily assume that Joy-Anna's baby will be due first, as well.

Unlike Joy-Anna and Austin, Kendra and husband Joseph Duggar do not have their own Instagram account — so there are few context clues to help figure out when Kendra is due. But here is what fans do know.

Shortly before Christmas, on Dec. 18, Kendra and Joe announced that they're expecting their first child together in the most adorable video, posted on TLC's website. During this announcement, neither Kendra or Joe stated when their new baby would arrive or described all of those telling details or symptoms that could indicate how far along the pregnancy was, but they did make it clear that the baby would be due in 2018 (which is obvious). Most women tend to wait until after their first trimester to announce their pregnancy, so it could be very possible that Kendra could be expecting her baby in June.

But this is just purely speculative since there is no proper time for a woman to announce that she is expecting. Still, due to the timing of her announcement, it is unlikely that Kendra and Joe's baby will arrive before Joy-Anna and Austin's.

Just three days after they rang in the new year, Jinger and her husband Jeremy Vuolo announced on their website that they're expecting their first child together, becoming the third Duggar to be expecting a baby in the new year. And just like Joy-Anna and Kendra, Jinger also didn't specify when she would be expecting their baby (darn). And because the announcement is so new, Jinger hasn't yet shared any bump update photos on Instagram. But Jinger is pretty active on social media, so it is likely that she will update her fans along the way.

But it is possible that Joy-Anna already spilled the beans about her sister's due date. Joy-Anna congratulated Jinger about her news in a video after Jinger announced she was pregnant, according to International Business Times, and said that she was "excited" because Jinger's baby was going to be "six months younger" than her own. So, if Joy-Anna is due in February or March, then that would make Jinger due in August or September. That means that Jinger will definitely be the last of these Duggar girls to give birth in 2018.

Of course, only time will tell (and confirm) when each girl is due, giving fans so much to look forward to this year.