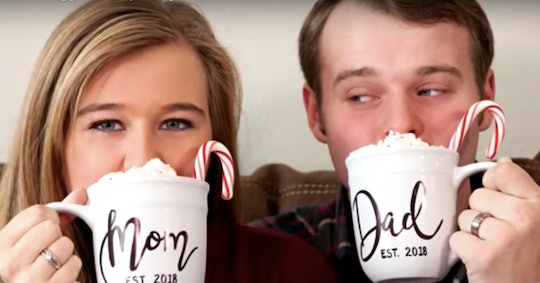 'Counting On' Season 8 Is Coming Soon — But Which Duggars Will Return?

The world first met the Duggar family on TLC's 17 Kids and Counting, which later became 19 Kids and Counting after the birth of Jim Bob and Michelle's youngest, Josie, in 2009. Since then, TLC has aired the spinoff that follows the large number of Duggar kids and their own children, Counting On. There's been a whole lot of counting because there's been a whole lot of new growing families — and 2018 promises even more baby news from the ever-growing, super-sized Duggar tribe. TLC finally confirmed this week that the show will be returning for another season in the Spring of 2018, according to Inquisitr, and now we're left wondering: Which Duggars will return to Counting On?

The Duggars' recent Christmas card shows just how many of them there are — pictured are Michelle and Jim Bob Duggar, all 19 of their kids and some new members including the spouses of Josh, Jill, Jessa, Jinger, Joy-Anna and Joseph, as well as Josh, Jill and Jessa's children. And, this year, we're expecting even more Duggars with news of babies on the way.

Fans got excited when they heard that Jana Duggar and Joy-Anna Duggar Forsyth were out getting pedicures recently and surrounded by a film crew, according to Celebrity Insider. Just a few hours thereafter, TLC confirmed that the show will be back next spring — and it did so in quite the revealing way.

TLC released an exclusive interview with Kendra Caldwell and Joseph Duggar, who announced that they're expecting their first child, and then casually dropped that fans could follow the baby's debut and the couple's journey with the return of Counting On.

That means that this season of the show already promises exciting news — and that those two will definitely be on Season 8. Likewise, I assume we'll get to see Joy-Anna Duggar give birth, who confirmed her pregnancy in August, according to People. In Touch Weekly reported that her rumored due date is some time in February, so we might get to meet a new Duggar on this season, too. Jessa Duggar also filmed her two births for the show, Hollywood Life reported, so it wouldn't be a surprise if Joy-Anna did the same. And, of course, Joy-Anna's husband, Austin Forsyth, will show face.

TLC will probably feature Jessa on this season, too, since fans obsess over her sons, Spurgeon and Henry, on Instagram.

With all the baby talk, we'll probably get a glimpse into the life of Jinger Duggar and her husband, Jeremy Vuolo, who are still contemplating reproduction unlike the rest of the family, according to People.

As for faces we won't see, well, there are a few. Jill Duggar and Derick Dillard, as well as their sons, Israel and Samuel, will be absent from the show. Derick denies that TLC fired him for seemingly transphobic remarks he made about reality star Jazz Jennings of the TLC show I Am Jazz; instead, he tweeted that he left by choice because he felt that cutting ties was best for his "family," which likely includes Jill's exit from the show as well.

In fact, Dillard recently confirmed on Twitter that his whole family will not be appearing in the new season. When one fan asked, "So you guys aren't on the show anymore?!!" he responded, "Correct."

In November, TLC tweeted that they have "no plans to feature him in the future." I can't imagine that the network will bring Josh Duggar back either. According to People, "TLC pulled the plug on 19 Kids following public pressure that erupted when a resurfaced police report from 2006 revealed that Josh had been investigated for child molestation of six people when he was a teen." It doesn't make sense that he'd come back at this point.

All in all, this new season will be missing a few Duggars (and for good reason), but it promises to be just as full potentially with a new Duggar and definitely with new exciting storylines to follow.