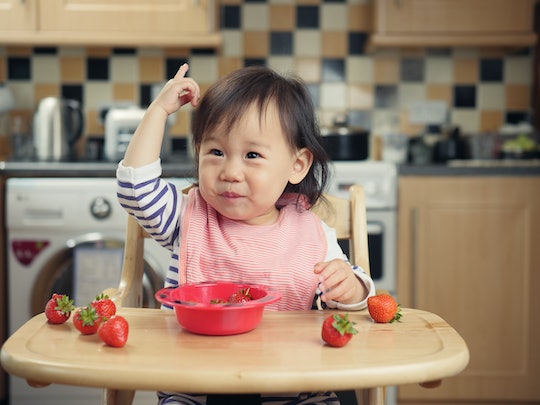 Have you heard of the Dirty Dozen and the Clean 15? Each year, the Environmental Working Group publishes these two lists, deciding which “dirty” produce is worth buying organic because it’s high in pesticides. It's a great guideline, especially for parents wondering which foods they should buy organic for babies and kids. As it turns out, though, these EWG lists are just the tip of the iceberg.

What about milk, meat, cheese, and packaged snacks? Should any of those be organic, too, for kids’ safety? Romper spoke to three experts who all had differing opinions on the matter. Angie Weiss, nutrition services director at Wichita Falls Area Food Bank in Texas, tells Romper that the debate about organic vs. conventional foods is “very personal for a lot of people.

“Within my organization, this is something we talk about quite a bit,” says Weiss. “If we look at what’s in the body of literature, it’s clear that both organic and conventionally grown produce is regulated for quality by the federal government and are considered safe. For a lot of families, it comes down to their level of access and level of income. From my standpoint, both are safe, and I’m all about creating less fear when it comes to food. To me it doesn’t matter so much, and whatever works for my price point is what I’m going to get.”

While access and cost may prohibit some families from buying organic, dietitians do have guidelines for those who are interested in buying some foods organic for their kids. For starters, it’s important to know what organic labels mean when shopping.

“Products typically have the USDA organic label on it,” says Ilyse Schapiro, MS, RDN, registered dietitian in private practice in New York and Connecticut in an interview with Romper. “There are different levels of organic, and it can also say made with organic ingredients, which means it’s made with a minimum of 70 percent organic ingredients. If it just says organic it’s 95 percent.”

Schapiro says when it comes to produce, it’s important to check the EWG’s Dirty Dozen each year. It changes annually after new rounds of testing, so don’t rely on old info. “Keeping up with the Dirty Dozen is important. There are some items that kind of waver, like cucumbers, plums, raspberries, and green beans. I always buy organic, and I can tell a difference,” she says.

As for products outside the produce aisle, Schapiro says anything you can find organic, well, can’t hurt. “Definitely meat, cheese, and yogurt are really important to buy organic, and for kids, granola bars, cereals, and crackers are important too. It has to do with the level of pesticides used, and we don’t know what they can do to our bodies.”

Anita Mirchandani, RD, a dietitian who practices in New York City, tells Romper she worries less about snack items and more about animal products. “For snacks for kids, crackers don’t have to be organic. You don’t want them to have too much sodium, but it doesn’t necessarily have to be organic. When it comes to snacks, frozen fruit or anything frozen, or juices, sugar, and ingredient lists matter more than organic. You want to see things naturally flavored, and not all these sugars,” she says. “Try to do dairy organic if you can, like string cheese, sliced cheese, and yogurt. I would say with meat, animal protein, and eggs, try to by organic or pasture-raised. That’s something to consider, just because we don’t trust the feeds these animals are getting and we want to make sure that we’re not ingesting that stuff.”

Rather than focusing on buying organic everything, Mirchandani suggests families shop local farmer’s markets or ask their grocery store’s produce staff more questions about their foods. “I would focus more on local, community agriculture concepts,” she says. “Those are mostly organic because of the farming practices. When you go there, ask people what they got in fresh that day, what’s local, what’s in season, or what’s going to ripe in a few days.”

Schapiro says the most important part of shopping organic is not driving yourself batty over your food choices, and that there are ways to make it more affordable in some communities. “It’s costly, so just do what feels right and affordable to you. You can shop the farmer’s market or join some of those food shares to bring the cost down. Don’t beat yourself up if you can’t.”