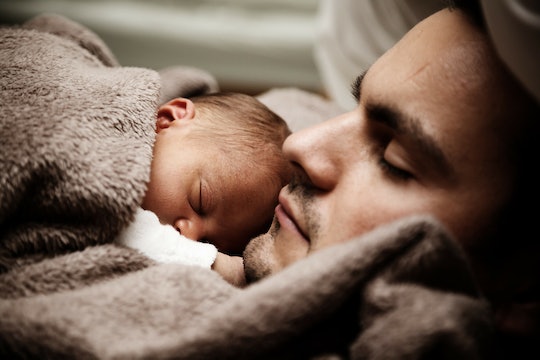 Which Politicians Are Advocating For Paid Family Leave? A Majority Are Democrats

Supporters of paid family leave at the federal level saw their dreams somewhat dashed in the early morning hours of Nov. 9, when Hillary Clinton conceded the 2016 presidential election to then-candidate Donald Trump. On the campaign trail, president-elect Trump announced his support for just six weeks of paid leave — for new mothers only — through what he called an expansion of federal unemployment insurance. Clinton's plan called for 12 weeks of paid family and medical leave — paid for with tax reforms — "to care for a new child or a seriously ill family member," according to the Hillary for America website. Though the United States is getting closer to finally catching up with the rest of the world, the question remains: Which politicians are advocating for paid family leave, and what do those policies actually entail?

Only nine of the world's countries fail to provide some form of paid leave for new parents, including some nations in the Pacific Islands, Papua New Guinea, Surinam, and the United States. Public backing for such federal legislation is widespread and bipartisan — among Americans 40 and older, 72 percent support paid family leave — but just 13 percent of the U.S. workforce has paid family leave through their employers, according to the National Partnership for Women & Families.

A handful of states have adopted their own policies to support working families. For example, New York passed a bill in April mandating 12 weeks of paid time off for all workers who become parents or need to care for sick relatives. According to Forbes, the program will be funded by small employee payroll deductions. Meanwhile, bills calling for paid family leave — such as Family and Medical Insurance Leave (FAMILY) Act — are gaining support in both the U.S. House and Senate.

Sponsored by Rep. Rosa DeLauro (D-Conn.) and Sen. Kirsten Gillibrand (D-N.Y.), the FAMILY Act would create a national family and medical leave insurance program providing workers with 12 weeks of time off, paid at 66 percent of their monthly wages up to a capped amount. Under the FAMILY Act, employees and employers would contribute a small amount from each paycheck to an insurance fund.

In addition to DeLauro and Gillibrand, elected officials supporting this proposal include:

On the other side of the aisle, the Family Friendly and Workplace Flexibility Act would authorize private-sector employers to voluntarily offer hourly employees the option to put earned overtime toward paid leave rather than extra compensation. Supporters of this bill include:

The third major piece of proposed federal legislation concerning paid family leave is known as the Strong Families Act, which would create a tax credit to encourage employers to voluntarily offer paid leave for workers. For each hour of paid leave provided, the employer would receive a 25 percent nonrefundable tax credit. The more paid FMLA time the employer offers (not to exceed 12 weeks), the greater the tax credit. The co-sponsors of this bill are:

Nearly one in four new mothers surveyed by the Department of Labor in 2012 returned to work within just two weeks of having a baby. Regardless of which proposal, if any, gains traction in a Trump administration, it's clear the United States has a lot of work to do when it comes to enacting federal legislation to support and protect working families.