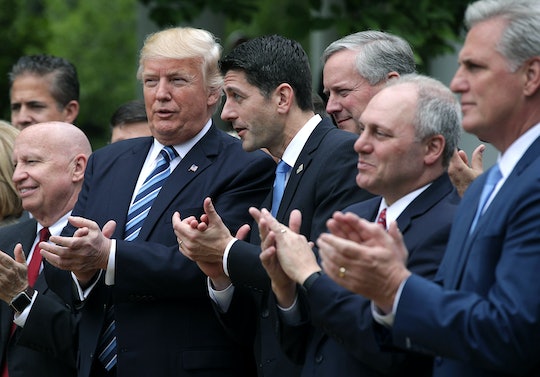 How Are Men's Health Conditions Affected By Trumpcare?

The term “pre-existing condition” should be ingrained in every American’s mind when thinking about the GOP’s new health care bill, the American Health Care Act (AHCA). A lot of the focus so far has been on women’s conditions — pregnancy, endometriosis, IVF, and menstrual irregularities — and how they will specifically suffer, should this deeply unpopular bill pass in the Senate. But what about those conditions affecting their male counterparts? Which pre-existing conditions not covered by Trumpcare would only affect men, if there are any?

The ACHA will undoubtedly weaken health care protections for many women with its pre-existing condition clause. If a woman is pregnant, or has been pregnant and required a C-section to deliver her child, her coverage will take a hit. If a woman suffers from severe period cramps because she needs to manage a chronic illnesses like endometriosis, her health insurance premiums could skyrocket. Basically, in President Donald Trump's world, being a woman is a pre-existing condition. The legislation is obvious on that front, but let’s take a moment and see how men’s health could be affected if Trumpcare is the new law of the land.

For instance, erectile dysfunction (ED) — when a man can't get or keep an erection firm enough for sexual intercourse — affects millions of American men (the Mayo Clinic estimates that figure is between 15 million to 30 million). While ED itself is not considered a disease, it is a physical or psychological condition that could be a symptom of a larger underlying problem. The standard protocol is that a doctor can diagnose a man with ED and he can then take prescription drugs or seek therapy to treat the condition.

Still, though, ED is not written in black and white within the latest draft of the AHCA as something that could affect someone’s health care. Instead, the bill notes “sexual deviation or disorder” as a pre-existing condition, which could include ED as the National Center for Biotechnology Information (NCBI) considers the condition a “sexual disorder.” Or, which is more often the case, men are misdiagnosed with ED when they could could actually suffer from hypoactive sexual desire disorder (HSDD) and sexual aversion disorder (SAD).

Other health conditions that only affect men include prostate diseases and cancer, penile and testicular cancer as well as enlarged prostate, and penis disorders (medical terms that include Peyronie's disease, priapism, balanitis, phimosis, and paraphimosis). Again, not one is specifically included in the ACHA's list of qualifying pre-existing conditions. Cancers would be included under "cancer" and other diseases and disorders could fall under "sexual deviation or disorder" — but the legislation isn't clear at the moment, so whether or not they would be a pre-existing condition is still up in the air.

It's still too soon to tell what the reality of Trumpcare will be for millions of Americans, but there's obvious reason to be concerned. As The New York Times reported, 13 male Senate majority leaders — including "staunch conservatives" and "ardent foes of the Affordable Care Act" — are currently drafting their revisions to the ACHA without a single woman there to shine a light on policies that directly impact women.

So, considering all of this, it's really no wonder that almost of the attention has been focused which women's health conditions are considered pre-existing conditions. As it looks right now, men could inadvertently be affected, but women will be.