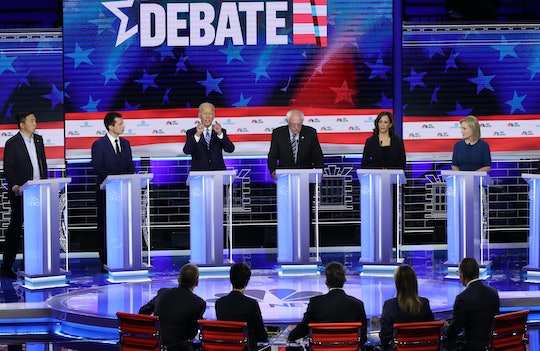 The first Democratic presidential debates turned into a bilingual affair soon after they started, with Beto O'Rourke kicking it off, answering a question in Spanish, and then English. And with the second round of debates kicking off tonight, it's fair to wonder which presidential candidates speak Spanish and who might show off their language skills on the debate stage.

Debate viewers can likely expect to see a few presidential hopefuls speaking Spanish on July 30 and July 31, although it probably won’t be as many candidates as you might have expected. With more than 20 people in the running right now, according to The New York Times, only a few of them switched over to Spanish at the June debates.

O’Rourke led the charge within three minutes as he answered his first question with a Spanish lead-in, according to USA Today. Not to be outdone, later in the debate Sen. Cory Booker turned to Spanish to answer a question. And near the end, Julian Castro reintroduced himself in Spanish by saying, “I’m Julian Castro and I’m running for president of the United States,” according to the Texas Tribune.

Pete Buttigieg, who's fluent in several languages, also spoke in Spanish during second night of the June debates, according to The Hill.

Though she didn't speak in a second language at the June debate, Sen. Elizabeth Warren has spoken Spanish at political events before. According to HuffPost, Warren addressed the crowd at an immigration reform rally in Spanish, though admitted she wasn't fluent. "My Spanish may not be great, but it’s coming from the heart,” Warren said at the time, HuffPost reported.

Former Vice President Joe Biden and Sen. Bernie Sanders, according to The Hill, are not known "for their language skills," though Biden often shares campaign messages in Spanish on social media. Sanders has spoken a little Spanish in the past, though he once told a crowd at a town hall in Puerto Rico his Spanish was "no es muy bueno (is not very good)," according to NBC News.

Sen. Kamala Harris, according to Politico, has made several appearances on Spanish-language media lately, and has used "a few Spanish words" during interviews.

New York Mayor Bill de Blasio's recent attempts at Spanish hadn't gone well. According to TIME, the Democratic candidate shouted "Hasta la victoria, siempre!" at a rally in Miami, which is "a well-known saying" of Marxist revolutionary leader Che Guevara. De Blasio later apologized in an interview with CNN and said he "didn’t understand the context... I literally understood it as a Spanish translation."

Rep. Tulsi Gabbard, according to Politico, has a "relatively clean" Spanish website for her campaign and Gov. Jay Inslee's Spanish site had a "good use of technical language." Meanwhile, Sen. Amy Klobuchar's Spanish site contained some "mistakes," according to Politico's analysis. And while her Spanish language skills might not be the most advanced, Sen. Kirsten Gillibrand can speak Mandarin, according to The Hill. Politico also reported that John Delaney, Buttigieg, and Andrew Yang all do not have Spanish websites.

Candidates Marianne Williamson and Andrew Yang have taken to Twitter to set the record straight on their Spanish skills. Back in June, Yang wrote on Twitter, "My Spanish is terrible," while Williamson shared with her followers that she needed "to learn Spanish" by the time she took the stage at the debates.

With all that said, it appears that a number of candidates have some pretty good Spanish-speaking skills, while others might benefit from a few lessons on Duolingo.