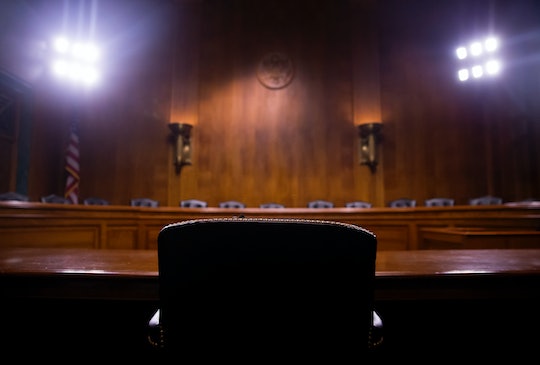 Which Senators Support The AHCA?

After House Republicans narrowly passed a bill to repeal and replace Obamacare last week, the fate of the American Health Care Act is now in the Senate’s hands. The GOP’s health care plan — also referred to as Trumpcare — still has a ways to go until it becomes law, and Senate Republicans are already drafting their own version of the bill. So it’s only the beginning of a very long and complicated process. (Who knew health care could be so complicated, right, Mr. President?) Still, it’s important to know which senators support the AHCA because if it could barely pass the House, it's possible that it could also happen in the Senate.

What will eventually happen in the Senate is hard to predict because it’s not clear right now how much of the latest version of the AHCA drafted by the House will make it into the final Senate bill, according to CNN. Although Senate is essentially starting from scratch and whatever gets passed could be entirely different than what we see now, Slate reported that there are indeed a few senators who like it pretty much as is and don’t seem to have “much of a problem with the architecture of the House bill.”

According to a Slate report by Jim Newell, those senators include Georgia Sen. David Perdue, North Carolina Sen. Thom Tillis, South Carolina Sen. Tim Scott, and Wyoming Sen. John Barrasso. And while these senators were more or less in support of some parts of the AHCA, they still had recommendations, like larger high-risk pools and writing legislation that makes people with pre-existing conditions feel protected.

According to CNN, other GOP senators aren't "necessarily dissatisfied" with the controversial policies the House bill proposes, but suggest that it might need to be totally revamped so the bill meets the specific rules for budget reconciliation — a process that would essentially block Democrats from filibustering and allows the bill to advance with only a simple majority of 51 votes rather than 60.

It's also important to note that group that will be creating this new bill does not include a single woman. As The New York Times reported, a group of 13 male Senate majority leaders are currently in the process of writing a new GOP health bill, including top Republican in the Senate, Mitch McConnell of Kentucky

But, whatever the Senate creates or however it edits or revises the AHCA in its current form, it then needs to go back to the House, which could make this process even messier and longer than it is right now. As The Washington Post described the next steps:

Even if Senate Republicans pass their own version of a health-care overhaul, it would have to be reconciled with the House version, creating complications. And if getting House conservatives and moderates to pass their initial measure was a challenge, it could be next to impossible to get enough of them to sign on to whatever the Senate decided to pass.

While there is a long road ahead until the nation faces new health care legislation, it's important to remember that politics is vicious and pushing this health care reform bill through has been one of the Trump administration's top priorities. For the sake of American health care, hopefully the Senate will pump the brakes and take a hard look at every ramification the AHCA could have.