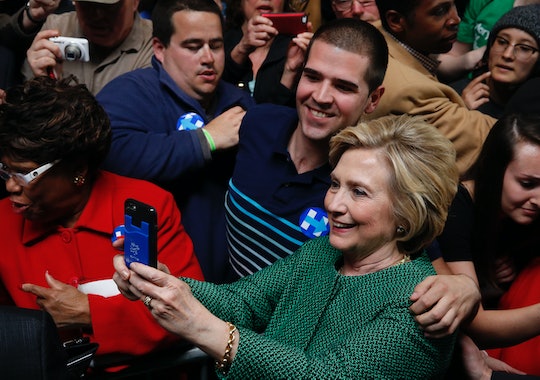 Which States Are Voting In The April 26 Primaries? 5 More States Weigh In

The presidential primary races are drawing close to the finish, with five more states set to vote on Tuesday. While those states that vote earlier tend to get more attention in the media, it's the later states that finally show which way the wind's blowing, so which states are voting in April 26th's primaries? Connecticut, Delaware, Maryland, Pennsylvania, and Rhode Island (all considered blue states) may give us our true victors. But do they hold the power to actually hand any candidate the nomination?

The Republican candidate needs 1,237 delegate in order to secure the nomination, and current front runner and former Lifestyles of the Rich and Famous guest Donald Trump has 845. Sweeping the five states would gain him an additional 172 delegates; not enough to win outright, but with only 502 left after that, it would make it impossible for his opponents, noted anti-trans activist Texas Sen. Ted Cruz or Ohio Gov. John Kasich, to gather enough delegates for a contested nomination. According to Bloomberg, the polls show him as the clear winner in all five states, and NBC has reported that, among Republicans, Trump just broke 50 percent support for the first time. This is getting scary, folks.

As for the Democrats, 2,382 delegates are needed to win, and front runner and former Secretary of State Hillary Clinton now holds either 1,428 or 1,944, depending on your thoughts on superdelegates (which can change their minds, but don't often, and not in great numbers). A sweep on Tuesday would net her either 384 or 462 (again, the superdelegates are messing with the numbers) so she could actually take the Democratic race this week. On the other hand, if Vermont Sen. Bernie Sanders managed a sweep, that would only bring his delegate count to 1,654. There are still 1,137 delegates left up for grabs after Tuesday's election, so no matter what, Sanders is still very much in the race, but lagging behind Clinton by almost 300 delegates after a five-state sweep wouldn't signal a lot of confidence for Sanders among Democratic voters.

While we're certainly not through with Cruz and Sanders yet (Kasich, please gather your things and go home; your ride has been waiting outside for two months now), this could be the tipping point where the lesser candidates finally see real pressure from their parties to step aside and let the more viable candidates collect their delegates without opposition. Of course, Cruz has never really seen much support from the GOP, so it's more a question of how much of a beating he can take before he finally goes back to Texas to make machine-gun bacon and do his bad Simpsons impressions in peace. Sanders, on the other hand, may very well stick it out until the bitter end, convinced that he can get a few hundred superdelegates to change their votes at the last minute. It's not looking very likely, but at least that means we'll get to see Larry David on Saturday Night Live for a few more weeks.