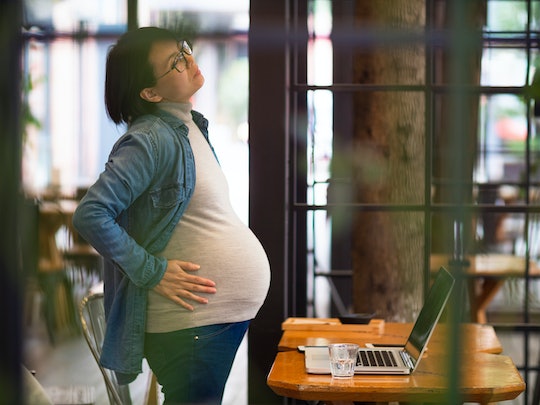 Here's The Trimester That *Really* Feels The Longest, According To Experts

So much of pregnancy feels like a complex algebra problem. First you have to track the weeks between periods, then count the days until ovulation, and that’s all before you’re even pregnant (let alone before you’re a parent who's calculating your child’s age in months like a modern-day Isaac Newton). Another thing you may be struggling to figure out? Which trimester is the longest for real. Grab your TI-83+ calculator (just kidding, you donated that in 2002) because there’s more math coming your way.

So while your pregnancy is considered 280 or so days, you’re not actually pregnant for those first two weeks, which are still factored into the first trimester. It’s weird and confusing, I know.

Pregnancy is divided equally into three trimesters, each lasting approximately 14 weeks. “Historically, the first trimester extends through 14 weeks, the second through 28 weeks and the third trimester includes the 29th through the 42nd weeks,” Peskin-Stolze says.

Though each trimester is equal in theory, this breakdown assumes that you carry for at least 40 weeks, which is not always the case; individual pregnancies can be shorter or longer. The shortest trimester is most likely to be the third, however, because some people have their baby before they hit the 40-week. “Depending on if delivery occurs before or after the due date, the length of the third trimester can vary for each patient,” Jennifer Butt, MD, FACOG, tells Romper.

Speaking of due dates, it turns out your doctor isn't just randomly picking a day that seems reasonable (shocking, I know). Due dates can be calculated using Naegele’s Rule, where you “add seven days to the first day of the last menstrual period, and then count backwards three months,” says Peskin-Stolze. Counting back three months is thought to be easier than counting forward nine months, though they do produce the same result. So, for example, if the date of your last period is Oct. 1, you add seven days, then count back three months, and your due date will be Jul. 8. Johns Hopkins has a helpful chart depicting this on their website if you're a visual person like I am, though the rule is based on a 28-day menstrual cycle (and it also assumes you actually remember the day your last period started), so it won't be particularly helpful if your cycle is much shorter or longer than four weeks.

Though the third trimester is likely to actually be the shortest, the first may seem like the shortest “because many women do not discover they are pregnant until their sixth to eighth week, or later,” Peskin-Stolze tells Romper. So, if you’re wondering which one will feel the longest, it’s most likely the second. This is probably a good thing because, for many women, "the second trimester can be 'the best trimester'," Butt tells Romper. "The nausea, fatigue, food aversions have most likely resolved by this point and patients are feeling physically better."

There really isn't a totally straight answer to the question of which trimester is longest. From a textbook medical standpoint, they're all equal, but the actual length, especially of the third, will vary depending on the pregnancy. Just don't get me started on the fourth trimester, which you may feel like you're in until your baby turns 21 — or 252 months old. But who's counting?