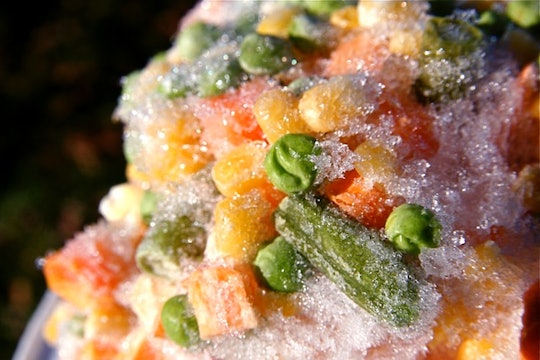 Which UPC Codes Were Affected By Costco Frozen Vegetable Recall

Just when you when you decide to stock up for a healthy lifestyle, a major food distributor issued a massive recall of certain frozen vegetables over listeria concerns. On Wednesday, the Huffington Post reported CRF Frozen Foods issued the recall after routine testing showed possible contamination and, luckily, it was caught early enough. No one has been reported ill from the foods to date, but you may want to sift through freezer and find out which UPC codes were affected by the Costo frozen vegetable recall. The distributor recalled a number of items sold at major food retailers in at least 35 states, so the news is understandably alarming. But, there is good news: It’s not too difficult to determine, but you will have to take a close look at the frozen produce.

The Food and Drug Administration (FDA) laid out a pretty simple guideline for the four frozen food brands that were involved in the recall — True Goodness by Meijer, Wellsley Farms Organic, Organic by Nature (sold in the U.S. and Canada), and Schwan’s — with veggies ranging from organic green peas, corn, mixed vegetables, and vegetable medley with edamame. The frozen produce were sent to stores in plastic bags between Sept. 13, 2015, and March 16, 2016, so it’s very possible that many of the products have already made their way to the dinner table without causing any illnesses.

If you realize that you have some possibly affected frozen product, check out the FDA's guideline and see which UPC codes are included in the recall.

Otherwise, have a look at the guideline below:

After you've crosschecked and if you discovered your frozen veggies were among those included in the recall, throw them away or take them back to the place of purchase for a full refund.

While there haven't been any reported illnesses to date, the possible contamination of listeria can cause serious infections in anyone. However, those with weaker immune systems — pregnant women, newborns, and the elderly — are especially at risk and could possibly be fatal, according to the Centers for Disease Control and Prevention.

Luckily, the recall was issued as only a precaution. But, it's better lean on the safer side, especially when feeding newborns and soon-to-be bundles of joy.