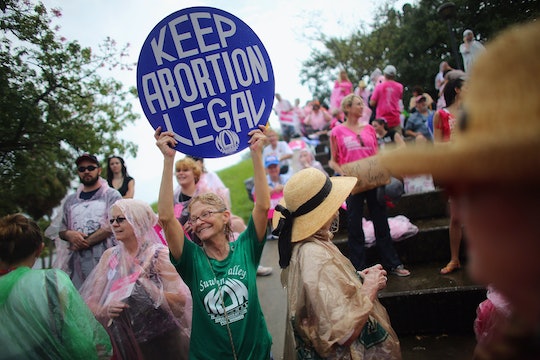 On Monday, President Trump doubled down on his stance concerning a woman's right to choose. According to a New York Times report, the White House said that Planned Parenthood would have to drop abortion services if it wanted to continue to receive federal funds, which sort of misses the whole point about providing American women with comprehensive, affordable healthcare. Trump told The Times in a statement, "As I said throughout the campaign, I am pro-life and I am deeply committed to investing in women’s health and plan to significantly increase federal funding in support of nonabortion services such as cancer screenings."

The president added, "Polling shows the majority of Americans oppose public funding for abortion, even those who identify as pro-choice. There is an opportunity for organizations to continue the important work they do in support of women’s health, while not providing abortion services.” Romper's request for comment from the White House was not immediately returned.

Cecile Richards, President of Planned Parenthood Federation of America told Romper via a statement that the organization is not going to take Trump on his offer, because it misses one major point: Federal funding has not gone to abortion services, ever.

To repeat: Federal money has never funded an abortion. The reason for that is this little thing called the Hyde Amendment, which has restricted federal funds from going anywhere near a woman's uterus for decades. Trump should have probably double checked his notebook before delivering such an ultimatum.

The president's insinuation that taxpayer money funds abortions is straight up false and misleading. Richards said that Trump doesn't understand that, to most American women, Planned Parenthood "is the solution, not the problem." Richards wrote,

The White House proposal that Planned Parenthood stop providing abortion is the same demand opponents of women’s health have been pushing for decades, as a part of their long-standing effort to end women’s access to safe, legal abortion. Planned Parenthood has always stood strong against these attacks on our patients and their ability to access the full range of reproductive health care.

Richards cheekily noted that she was happy to see most of the organization's work wasn't going unrecognized. "We are glad that the White House understands that taking away the preventive care Planned Parenthood provides is deeply unpopular and would be a disaster for women’s health care," she said.

The Times also reported that Planned Parenthood representatives have been told by White House officials that their federal funding earmarks could even be increased, if only they didn't perform abortions. But that just doesn't make sense to supporters of the organization.

Federal funding for Planned Parenthood comes in Medicaid reimbursements. Those reimbursements, by law, cannot go towards abortion services. So when legislators cut funding for the organization, they're cutting basic healthcare coverage for women who come for checkups, STI testing, cancer screenings, and even pre-natal care.

In the long run, defunding Planned Parenthood could actually cost the American taxpayer more. In a statement to Romper, the organization explained,

Blocking access to care at Planned Parenthood hurts communities that are struggling to get by the most, especially those with low incomes, those living in areas with no other quality health care providers, and communities of color who face systemic barriers to care.

Trump's informal comment that Planned Parenthood could receive federal funding if it didn't provide abortion is an affront to any advocate for women's healthcare. A woman's right to choose what she does with her body is fundamental to her healthcare (and if we have to get really cynical about it, just good economic policy).